This summer, buses in Shanghai, Nanjing, Chongqing and Wuhan, and campus MD media in Beijing, Shanghai and Guangzhou, will feature lyrics from 10 of The Selector's favourite artists from across the UK, accompanied by a line of notated music.

The UK Music on the Go campaign aims to promote the richness and diversty of the UK music scene, using QR codes to direct audiences to the UK Now site, where they can listen to the 10 tracks, and participate in a competition to win tickets to Bestival in the Isle of Wight, UK. The campaign highlights The Selector's extensive reach in China, as well as a growing appetite for UK music in the region.

The Selector is now broadcast on Chinese radio stations throughout Wuhan, Chongqing, Shenzhen, Beijing, Xi’An, Nanjing and Dragonfly FM online. Recently Goldierocks flew out to Shanghai to launch the campaign. 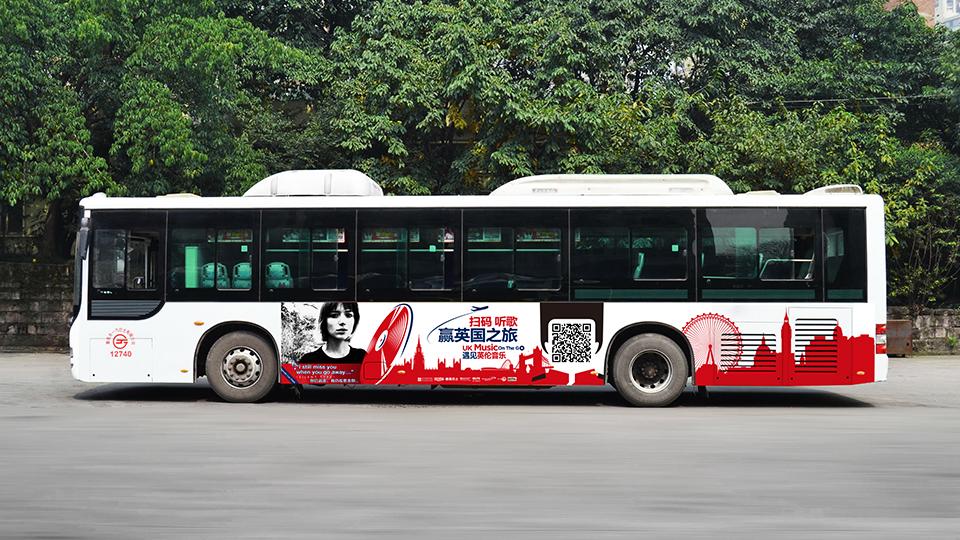 ABOUT UK NOW
UK Now is a new arts and culture platform from the British Council offering original and new experiences, opportunities and insights.
Across theatre, dance, visual arts, literature, architecture, design, film, music, fashion, creative skills, arts and technology it leads a creative dialogue connecting UK arts and culture with China.
In 2015, UK Now is also the key platform for the 2015 UK-China Year of Cultural Exchange.
UK Music on the Go Artists:
Band: As Elephants Are
Song: Crown
Genre:Alternative rock, Indie, Pop
Quote on buses: “the words will turn to stone…”
Band: The Bohicas
Song: To Die For
Genre:Indie, Rock, Punk
Quote on buses: “You've heard it all before…”
Band: H Hawkline
Song: Moons In My Mirror
Genre:Alternative rock
Quote on buses: “soft as brown sugar…”
Band: Temples
Song: Shelter Song
Genre:Rock / Folk Rock
Quote on buses: “Like a Summer day that’s always long…”
Band: Golden Fable
Song: Lifeline
Genre:Rock / Electro
Quote on buses: “Silence greets me, each and every day.”
Band: Hannah Lou Clark
Song: Silent Type
Genre:Pop
Quote on buses: “I still miss you when you go away…”
Band: Rustie
Song: Lost
Genre:Electronic / Lazer hip-hop
Quote on buses: “I admit I’ve made mistakes.”
Band: Silences
Song: The Sea
Genre:Indie / Folk / Acoustic
Quote on buses: “I'll brave it all…”
Band: To Kill A King
Song: Love Is Not Control
Genre:Indie / Rock
Quote on buses: “the rules we set are the rules we break…”
Band: Young Fathers
Song: Liberated
Genre:Electro / Hip-hop
Quote on buses: “Don’t hesitate for a second…”
ABOUT 2015 UK-CHINA YEAR OF CULTURAL EXCHANGE
2015 marks a flagship year for UK-China relations with the first ever bilaterally agreed UK-China Year of Cultural Exchange, showcasing the very best of UK culture in China and of Chinese culture in the UK.
The Year comprises two seasons of culture: a UK season in China from March – July, led by the Cultural and Education Section of the British Embassy; and a Chinese season in the UK in the second half of the year, led by the Chinese Ministry of Culture.
“The 2015 UK-China Year of Cultural Exchange is a unique opportunity to further deepen and strengthen the UK’s existing relationship with China across the arts and creative industries, and to build on long-standing foundations of mutual respect and appreciation for our long and rich cultural histories, which continue to inspire innovation and creativity.” – Carma Elliot, Minister, Cultural and Education Section of the British Embassy.
The UK season of the 2015 UK-China Year of Cultural Exchange is sponsored by IELTS. It is supported by Strategic Communications Partner, BBDO and Strategic Media Partners including China Daily, Phoenix Media, Modern Media Group, Tencent and Youku - see more here.
//