Gawain Hewitt is a musician, sound artist and educator. He is Head of R&D for Drake Music, lead technologist for the Animate Orchestra and an experienced music practitioner in Pupil Referral Units. Gawain is one of the recipients of our Arts Council England-joint Artists International Development Fund.

It’s the bells that have stayed with me. Arriving in Dhaka, Bangladesh there is the expected assault on the senses, the full gamut of smells and hues rising out of the teeming masses of people packed into this extraordinary city. The dirt and the spices, the bright signage and mud-spattering, the nose and eyes taken aback by this grand masala of people, simmering together.

The sounds say something different. Listening back now to recordings I made, it’s the bells, the constant bells of bicycles and rickshaws, the ting-ting and ting in the performing of this rolling liturgy that is street life. The bells and horns and shouts of voices all announce, ‘I am here.’

In a busy city – the word bustle doesn’t adequately describe the density of being that is Dhaka – to announce one’s presence, to affirm the fact of one’s identity amidst the anonymising crowds and constantly mixed sensations is vital. The ting of the bell – ‘I am here!’ - is to preserve one’s life, to stop this city colliding with you and rolling you under.

So why am I here? I am here to hear. Funded by the British Council and the Arts Council England, the aim of the Artists International Development Fund is to allow artists to explore their practice in countries that are new to them. The project I proposed began as a scribble on the back of a piece of paper in a Kings Cross pub – an idea centred around a sound exchange between London’s Brick Lane and Dhaka. Expanding from there, I ended up travelling to Bangladesh to hear the sounds that still sustain the thriving diaspora of London’s East End, and to bring the sound of British Bangladeshis back to their homeland. In this ringing of bicycle bells there is the enduring song of existence, of uniqueness. ‘I am here,’ they sing, explaining that they are Sylheti first, Bangladeshi second.

Hearing is not a straightforward task. I want to be as silent as possible and generate as little noise as I can, but as a 6’4” westerner I ring loud, shouting my presence like the tower I am. I stop in doorways and wait to be unnoticed, or fold myself into the hoods of rickshaws with just the microphone staring out. There’s discomfort in some of this: the way people use space is so different, it’s hot and humid and the traffic is like nothing else I’ve ever seen. 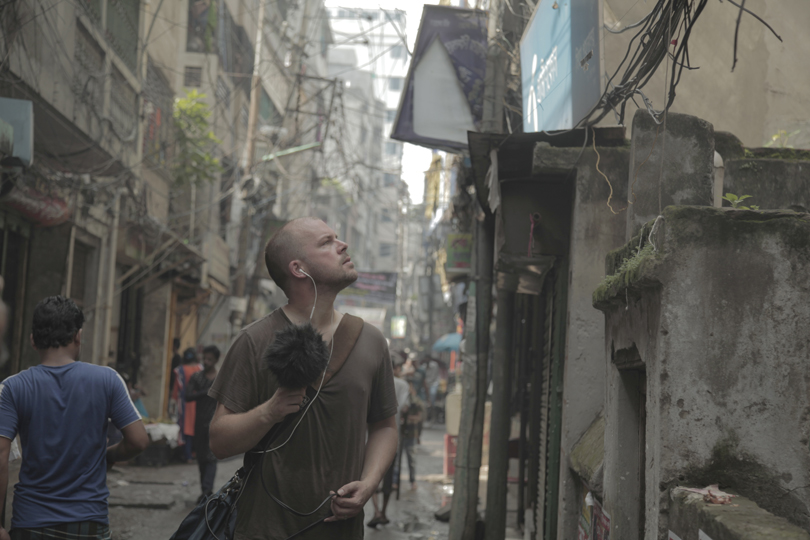 When I first arrived my guide was keen to point out to the golf club, the expensive hotels, the best restaurants in town. Obvious pride in the finer points the city has to offer, but that’s not what I was there for. I didn’t want to consume, but be consumed; not to eat out in the city, but be bitten by it.

My principle partners were DES – the Dhaka Electronica Scene. They run club nights and produce music, and I was able to run a couple of master-classes for them. The issue of listening was pertinent here too. I met one of the biggest rock bands in Bangladesh while I was there, but, sipping American style beers in an American bar, the conversation was all about American guitar players churning out American riffs. Everything for these guys was about gazing out West. DES, by comparison, are far more interested in listening to what is around them, and building from there.

In a world of global monopolies developing countries are not being given enough of a chance to develop an indigenous digital culture. It would have been easy to do sessions with DES on dubstep and EDM. What I was more interested in doing was encouraging them to resist sampling from Western music, and represent the rich sound world that they already live in, to go out – as I had been doing myself – and listen to what was around them.

With internet speeds so high and bandwidth so broad, artists in developing countries can too easily adopt the digital culture of the West. It’s a sort of passive cultural imperialism, and something that I wanted to actively resist.

With this in mind I am working with Shoummo, a founding artist from DES to develop a sound commission for the Spitalfields Winter Festival 2014, using it as context to teach coding, sound design and site based artistic practices, with a view to these skills being spread through the work of DES. Conversations will be a pair of mix media cityscapes, one of Dhaka (to be shown in London) and one of London (to be shown in Dhaka). Presented as a large canvas photographic print, the sounds of the landscape will play through the canvas in the form of generative music, inspired by and formed by the sounds of the street depicted. Embroidery in metal thread will add texture and light – touching the thread will add the listener to the piece, and so the music will change as you converse with the piece. 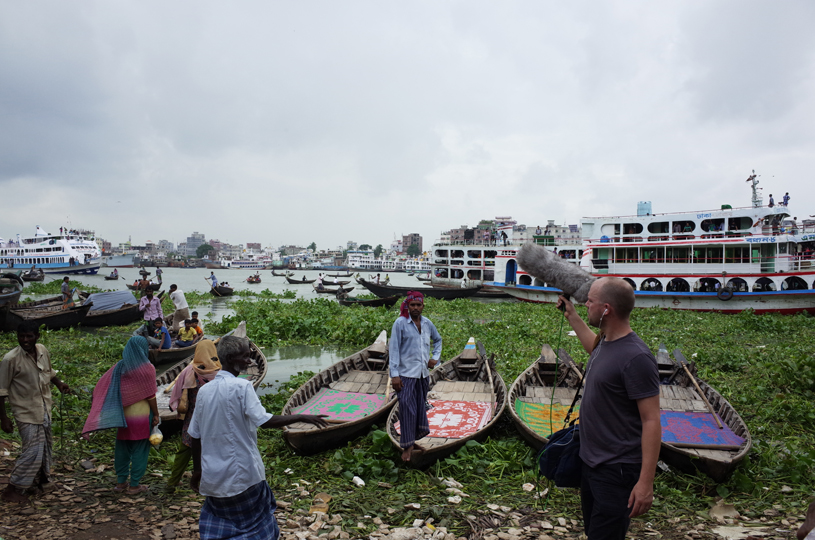 My work as a sound artist has always had this element to it. My role is never to impose sounds onto a community. Rather, it is to allow that community to bring its sounds to me, and for me to use my skills in digital technology and communication to curate those sounds and gift them back to them. In this way I hope that my practice of re-presenting sounds to a community can inspire others to grow and develop their own artistic practices too.

In Dhaka what this meant was understanding a natural way for a community to experience art. For my principle piece, Together, I had initially envisaged installing listening stations in the form of simple humanoid heads, two in London, and two in Bangladesh. Together invites you to sit down next to the head, place headphones on and listen. Your headphones connect directly with the ears of a joined sculpture in the second country, but the sound from your head’s ears travel to a third sculpture. Continuously together, yet eerily apart, this piece comments both on the immediacy of modern communication as well as the aloneness and abstract nature of communication via keyboards and phones. I soon came to see that this wouldn’t have been a good cultural fit in Bangladesh, and would serve only a small audience. In seeking a conduit that fits better with the Dhaka I visited, and allows the flexibility to be freely available to all, regardless of wealth, status or cultural engagement I’ll be modifying four rickshaws. Participants will ride around in them with the head as a co-passenger and listen to the connected sculpture in the second city as they travel. Two in London, near Brick Lane, one in Dhaka and the fourth in Sylhet. Together will be a thought provoking and interactive space to reflect on being, social networks and community. Together will be developed to be shown as part of the Spitalfields Summer Festival in 2016.

My hope is that through a focused act of listening people will see the people of Bangladesh in a different way: Bangladeshis living in London seeing Dhaka in a new way, and Dhaka Bangladeshis seeing the diasporic community in London in a new light too.

My job, as ever, is to be as silent as possible in this. To somehow make my microphone disappear, to whisper ‘I am not here,’ as the bicycle bells ting and call to another, announcing their presence.

To sample a taster of Gawain's work be sure to check out "Conversations" which will be exhibited at various venues as part of the Spitalfields Winter Festival from 5-16 December 2014. More information please visit the festival website.

Jimi Hendrix - Are you experienced?

They way that Hendrix played and made records was so all encompassing, and immersive, both in his mastery of guitar and sound, but also in representing the time in which he lived. I could have chosen any track, but Are you Experienced to me gives a hint of where Jimi may have gone next, and, as a technologist, I like the experimental studio techniques.

Cheating here, as this track allows me to sneak in two favourites, Massive Attack and Tracey Thorne. Massive attack introduced me to so much that defined what I love about music. Their use of dub studio techniques, and rich, chewy involving sound. Electronic music always sounds so organic and musical in their hands, and huge - a real wall of sound. Tracey Thorne is an amazing songwriter, and this lyric is so raw and honest, it’s almost as if you’ve walked into a deeply personal moment of someones life and shouldn’t be there. Powerful.

I consider this to have much in common with the Tracey Thorne lyric on protection. Again such a raw and emotionally honest song. And then we have Prince, funky, melodic, strutting. It’s just music to move to. Melancholy to dance to, astonishing.

I got the album Modus Operandi when it first came out and I still listen to it all the time. Photek’s stunning use of sounds, samples and sequencing precision is one of my benchmarks for excellence in electronic music. On loud on headphones while walking through London at night is a hugely evocative experience. This record is one of the reasons I started to make electronic music.

I still consider myself very new to the world of sound as art, and the experimental and broader use of sound and music in performance and art. Coming across this track recently was just so exciting. I was driving through Whitstable in Kent, listening to a Spotify playlist by the journalist Sasha Frere Jones, and this came on, straight after Madonna. I had to stop driving. It sounded so bizarre and unique. Playful and completely disregarding all the rules as I see them. Car stoppingly brilliant - a remarkable record.