I’ve just witnessed a birth in Brazil. It was pretty painless, though the labour was long – around a year. Yesterday the Association of Brazilian Orchestras (ABrO) came into the world during the MultiOrchestra International Conference in Rio de Janeiro, witnessed by Brazilian orchestral managers, educators, journalists and musicians, and special guests from the UK orchestral sector – managers, educators, musicians and a composer! The first kicks had been felt last year in Belo Horizonte when the Brazilian sector first met the UK sector, and beautiful music was heard (actually – performances by Aurora Chamber Orchestra).

It’s hard to pinpoint exactly where the journey started, though I do remember conversations at ISPA (International Society for the Performing Arts) conferences over many years with Claudia Toni, a veteran of the orchestral and cultural sector in Brazil, about the challenges facing the Brazilian orchestras, and how she wished they could learn about the experiences of UK orchestras. She was talking about our sector’s resilience, its work nurturing and growing audiences through education and outreach, and its support for composers for starters.

Meanwhile, the British Council Music Department was working closely with Mark Pemberton, CEO of the Association of British Orchestras (ABO) on initiatives to shed light on some of the more unusual territories that could offer our UK orchestras and ensembles the opportunity for touring and other collaborations: China was first, then India, and then Brazil. It was in January 2013 that we were first dazzled by the loquacity of our some of our Brazilian colleagues during their visit to the ABO conference in Leeds, as they introduced their vast homeland to us, and the role played by orchestras in this most diverse and beautiful of countries. In return, they were fascinated by the diversity of the UK orchestras’ work, their management structures and business models, and friendships were formed.

A major piece of the puzzle was the dialogue between my esteemed colleagues Paul Parkinson (Music Department) and Luiz Coradazzi (Director Arts Brazil), and myself, around the potential for bringing together the two orchestral sectors in the UK and Brazil into a closer relationship - with a view to sharing and learning, and supporting and guiding the Brazilian sector to organise itself and create its own trade body. Transform, the arts programme launched in 2012 with the aim of developing the artistic dialogue between Brazil and the UK for mutual benefit and long-term impact, provided the perfect home for this to happen.

And so here I am – sitting at the airport in Rio waiting for the night flight home – energised and inspired by the enthusiasm, fascinating presentations, lively dialogue, ambition and optimism of the second orchestral conference organised by the British Council in Brazil and the ABO. The opening concert performed by the Scottish Ensemble, surely one of the finest string ensembles in the world, featured music by Sally Beamish for ensemble, fiddler Chris Stout and harpist Catriona Mackay, and contemporary work from their 20th-Century Perspectives project originally performed in the Anderson Centre, an important Glasgow Modernist landmark designed by Richard Seifert and completed in 1972. This set the scene perfectly for the theme of the conference: Orchestras and the City. 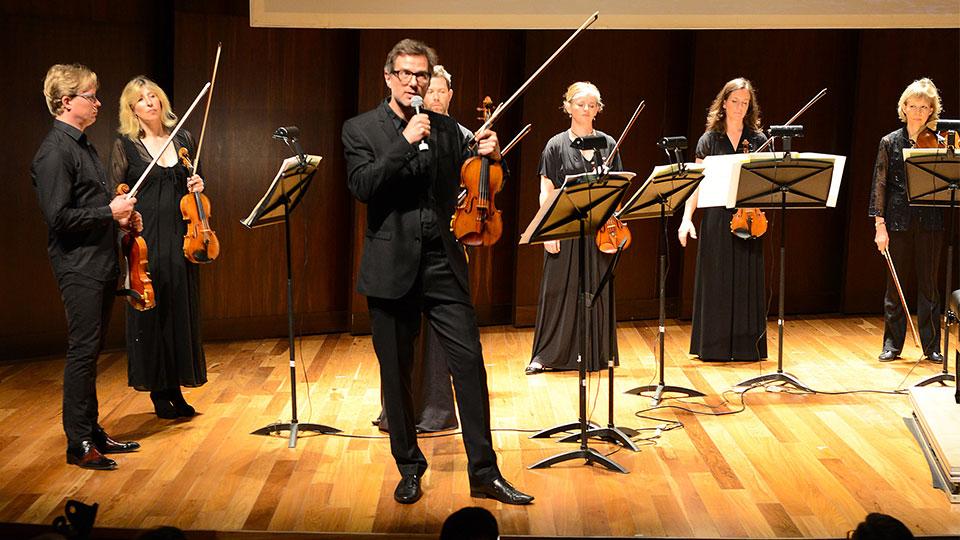 Above: Jonathan Morton & The Scottish Ensemble

Stephen Maddock from CBSO (City of Birmingham Symphony Orchestra) gave the keynote speech about his own orchestra’s place in the Birmingham urban landscape. Katherine Zeserson and Brazilian colleague Mauricio Cruz worked with the many young people at the conference on a special Leadership Programme for young musicians, building on work done together over several years on another Transform project.

Sophie Lewis from Sinfonia Cymru shared the new directions her ensemble is taking with its young players; Southbank Centre’s Annie Sheen talked about her vision of the orchestra of the future with young Brazilian counterparts, before travelling to spend two weeks with Neojiba, a remarkable organisation of youth centres and orchestras in the state of Bahia as part of the Transform orchestral programme (UK orchestras had welcomed their Brazilian counterparts for residencies last year). Marina Vidor described the ground-breaking digital work of the Philharmonia. Confident and thought-provoking contributions also came from the Royal Northern Sinfonia’s Thorben Dittes, Live Music Now Scotland’s Carol Main, and conference curators Mark Pemberton, Fiona Harvey, Luiz Coradazzi and Claudia Toni. And I haven’t even started describing the inspirational Brazilian speakers, among them Neojiba’s remarkable Ricardo Castro, Paul Zuben from Santa Marcelina Cultura, Claudio Dauesberg from the vibrant Rc4 Festival, the young composer Bianca Maretti… I could go on.

I am guessing that next year’s conference – and there will be one, I’m sure – will be the first presented by the newly-minted ABrO, which is on its way to becoming a passionate advocate and laboratory for orchestras from all over the huge country that is Brazil. And what I have brought away with me is the joy and excitement of that momentous occasion, enormous pride in my UK orchestra colleagues and my Brazilian British Council colleagues (who did a brilliant job), and a renewed belief in the power, relevance and strength of classical music and the orchestra. Long live the ABrO!