I’m just back from an intensive three day stay in New York, partly attending the annual NY congress of ISPA (International Society for Performing Arts) - the last as a Board member - partly catching up with colleagues and checking out some amazing performances and new performance spaces. Attended each year by 400 delegates, the ISPA conference offers stimulating comment and debate on artistic practice and issues of arts management and leadership, and the opportunity to meet and learn from peers from all over the world including delegates from Egypt and Jordan and Palestine thanks to support and facilitation by the British Council.

The most remarkable architectural experience this year was provided by the brand new music venue National Sawdust in Williamsburg. Built within the shell of an old sawdust factory just a couple of stops into Brooklyn on the L train, it is a visually bold and flexible small venue programming avant-garde and experimental work. Designed by architectural studio Bureau V working closely with an Arup Acoustics/AV/Theatre/Lighting team, led by Brit Raj Patel, the venue is supported by an unusual business model involving philanthropists buying shares in the building against its virtually guaranteed future increase in value which allows it to function as a not-for-profit.

I was there with Graham Mackenzie from the Huddersfield Contemporary Music Festival, himself in town finalising a collaboration with the Philadelphia Orchestra resulting from a recent British Council-supported showcase event. We saw Agata Zubal’s Between, performed by Zubal herself, ex-Kronos Quartet cellist Jeffrey Zeigler and three dancers, with the venue’s white backdrop, slashed through with black, almost part of the action. 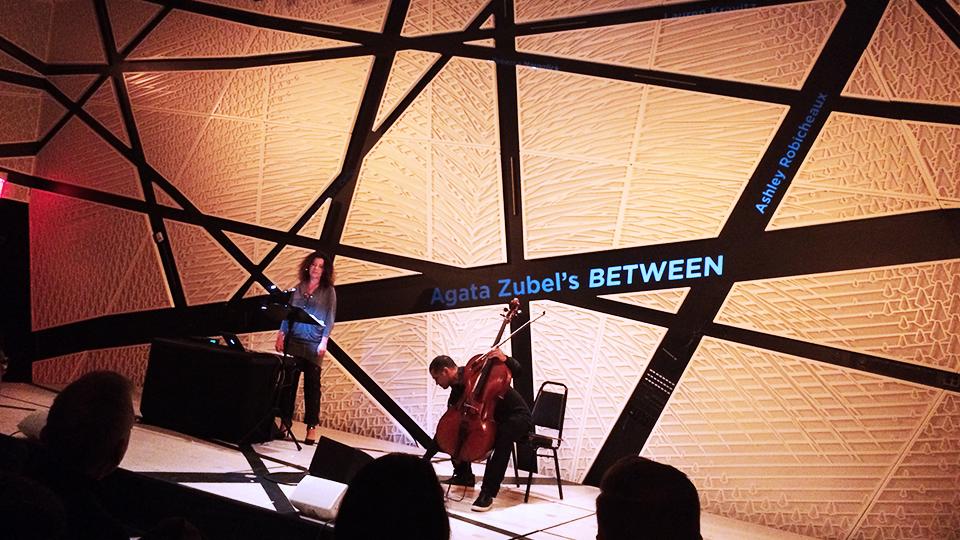 The day I left for New York I was still coming to terms with the news of David Bowie’s death, and like many other people, was taken aback at the strength of feeling it evoked in me. As well as triggering countless articles and tributes to the man and his music, it has even opened a discussion around the validity of public grief to which JK Rowling has contributed, following yet another recent death, of the hugely popular actor Alan Rickman, just four days after Bowie’s.

At the opening of the ISPA conference, just blocks away from Bowie’s New York home of many years, performance artist, composer and musician Laurie Anderson ended her keynote speech with a Little Song for David.  The fact this resonated with the whole auditorium of delegates from 45 countries, spanning an age range from early twenties through to eighties, spoke volumes. We all have our favourite album, or a particular attachment to a certain period of creativity in a five-decade career of extraordinary diversity, and everybody seems to want to talk about it.

I find it remarkable that while Bowie was making Hunky Dory in a studio in Soho, another of my musical heroes, French conductor and composer Pierre Boulez, newly-appointed Chief Conductor of the BBC Symphony Orchestra, was starting his now-legendary new music concerts just a couple of miles away at London’s Roundhouse, a converted circular railway shed in Camden. Uncompromising as a composer, he created a new musical language fit for the post '45 war period with works such as Le Marteau sans Maitre for voice and ensemble from 1955 and Pli selon Pli for soprano and orchestra from 1957. Just as uncompromising as an administrator, among his great achievements was the creation of Ircam (Institut de Recherche et de Coordination Acoustique/Musique) in Paris, for research into acoustics and composition, and the Cité de la Musique in the north of Paris, a development incorporating concert halls (the latest opened only last year) and the Paris Conservatoire.

But his influence was also felt in the UK. As Chief Conductor of the BBC Symphony Orchestra from 1971 to 1975, his programming introduced the British public both to the music of the first half of the twentieth century and also to the music being written at the time. As conductor of the London Sinfonietta’s first tour abroad in 1968, he helped establish the international reputation of the British Contemporary Music Ensemble which is still regarded as one of the best in the world.

Boulez died on January 5th, Bowie on January 10th. In the first days of January 2016, the world lost two musical giants. But in New York, against all the odds of a difficult financial climate, the avant-garde and experimental scene continues to thrive.