Everyone talks about the traffic in Jakarta the way people talk about the weather in Britain. It's such a huge part of everyone's day; the commute to work can take hours. Necessity generates a practical approach to getting around this huge, often gridlocked city. I have a few whirlwind days in Indonesia as part of a research visit for the British Council. I hope to cram in as many meetings as possible and glean as much as I can from key music contacts about the Indonesian music sector. We resolve the issue of getting around by hosting a few roundtable sessions and inviting many people to the same space to convene and discuss what matters most to music people in Indonesia. We want to find out what people are interested in, what audiences are listening to, what the challenges are in the recording and live music sectors, where the opportunities are and how the future looks. The British Council are developing a season of cultural exchange, ID:UK, that will bring together Indonesian and UK artists, organisations and practitioners to exchange ideas, collaborate and co-create new music and art projects. We hope that connections will help forge new relationships, inspire future projects and help support new work.

"How can you play to huge audiences and not make a living?"

My first big surprise is that heavy metal is huge in Indonesia; it’s revered and respected as a driving force of the independent music scene. Who knew? I meet music entrepreneur Robin Malau, and artists Otong and Adam from Koil – one of the biggest bands in this scene. We chat over lunch and I ask them about what it's like for musicians to make a living in Indonesia. Otong is the band’s handsome, charismatic, tattooed singer-guitarist who is emphatic that few can make a living as an artist, just from music, even though he bought the café we’re sitting in from money made from touring. By way of example, he tells me about Burgerkill, one of the more successful groups around and have been going for some time, touring internationally – including UK rock festival Bloodstock. They recently played a festival in Kalimantan (Borneo) to 75,000 people. “How can you play to huge audiences and not make a living?” I protest, but the context is so very different compared to back home. Most big shows and festivals in Indonesia are paid for by sponsors – tobacco companies included – and the expectation is that music is free to the audience. 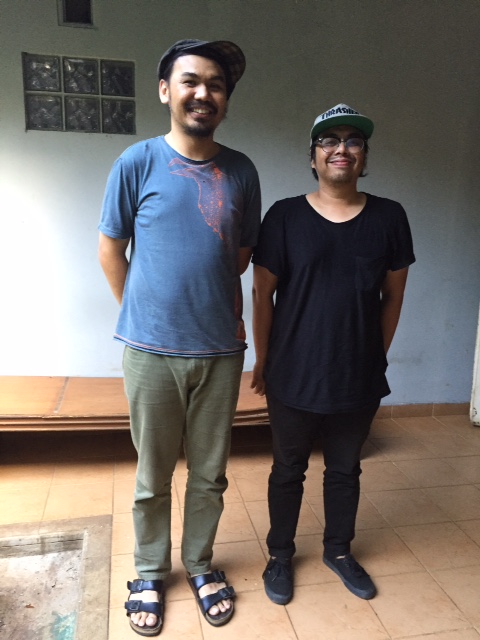 It’s evident, as meetings progress, that Indonesia has a vibrant DIY, can-do culture. No-one seems to sit around waiting for things to happen; they make it happen for themselves. I meet Alvin Yunata and David Tarigan from indie label, Demajors (pictured left, photo: Joel Mills). They enjoy the opportunity to wax lyrical about how British and western music is so popular and influential on bands in Indonesia – especially Britpop and shoegaze genres. Bands some of us have probably long forgotten about are still cited as strong influencers here. Shed Seven, anyone? But Indonesians have a deep love of music, new and old, and they are avid records collectors. Perhaps this is what has led them into an independent archiving project, Irama Nusantara, collecting Indonesia's music history. They recognised that there was no archive of Indonesian music and that their music history was in danger of being lost. Many old Indonesian records didn't even have dates on the labels. My colleague Kemi takes me to visit a large market hall, Pasar Santa, where many independent record shops have sprung up in the market stalls amongst fruit and veg and household goods. DJ Samson Pho has his own shop, Laid Black Blues Records. Digging in the crates I find Beatles and Britpop in abundance, but there is also plenty of Indonesia's own golden music history: psychedelia, dangdut, soulful crooners and surprises aplenty.

My colleagues have arranged a large roundtable session with a selection of movers and shakers, indie and major label mangers, artists, digital platform hosts, producers and festival and concert promoters.  Following a round of introductions, I ask about the challenges and opportunities for the sector here and what they feel is needed to grow. The same key issues come up again and again. No royalties. Little infrastructure. Support from government is minimal. Recent intellectual property and copyright laws are yet to be properly implemented … and enforced. Artists just don't have a collection agency that can effectively process and return royalties in order for them to make a living. In the UK 3% of ticket sales are paid to PRS, and of course songwriters and artists see returns on song-writing royalties through radio play, synchs and live performance. It’s an important part of the music economy and without it, artists just don’t see the returns. I ask about artistic identity, given that many have mentioned the strength of international influences. I want to grasp what it is that makes Indonesian music, well, Indonesian. Is there a particular sound? It precipitates some of the most interesting discussion and carries on way beyond the meeting. Dangdut is felt to be peculiar to Indonesia, its origin in Malay folk and since transformed with modern beats and pop production style. As we talk, I get a strong sense of artistic community; everyone seems to know each other and they work alongside and support each other's events. People are generous with their time and genuinely seem pleased to have a forum which to share common issues and exchange thoughts about what the future can look like for them. “We see each other all the time” one says, “but we don't really get to discuss these issues together in this way”.

It’s evident that support for the creative sector is much needed; there’s a need for some finance and copyright enforcement to ensure artists get paid for their work. The overall sense I come away with is how entrepreneurial so many young Indonesians are, and indeed have to be; not simply making do but making good.

“Trust me, we have cool shit” declares Teguh Wicaksono, co-founder of Sounds from the Corner and current communications manager at Twitter, showing an abundance of artistic confidence. New fires are being stoked. I look forward to hearing more Indonesian music and telling people back home about this extraordinary scene.

Robin Malau will be a speaker at the Music Cities convention and a delegation of Indonesia music contacts will be at the British Council's Great Escape showcases.

A little selection of tunes here to give you a feel for Indonesian music.