Two British musicians, James Young and Aiden Whalley, better known as Darkstar, travelled to South Africa in June 2016, interviewing local people and putting together a stunning live music and film show from what they’d heard. Performances took place in Cape Town and Johannesburg on June 11 and June 12 respectively; the recordings of interviewees were woven into the tracks to form a powerful combination of audio documentary, electronic music and political statement.

They were invited to South Africa as part of the Encounters Documentary Film Festival, in partnership with the British Council Connect ZA programme. The trip followed the success of their 2015 album, Foam Island. The album saw the duo spend 15 months in Slaithwaite, near Huddersfield in the north of England, interviewing young people about their views on everything from what they dreamt about last night to what they thought about the general election. “It was difficult at first as not many people had heard of Darkstar in West Yorkshire,” Young told us, but he persisted. “Slowly but surely we started to re-visit a group of people who were interested enough in the project to keep on talking to us and then tell their friends so the group we were talking to became bigger and more varied in terms of age, race, beliefs and what they wanted in life.”

The music and lyrics on the resulting album were born out of those conversations. The music weaves around spoken word samples of the people they encountered, giving exposure to a group of people that Whalley says "aren’t involved" in the wider media conversations in the UK: "the people being ignored".

The album was not only something different but it also garnered critical acclaim. It even led to headlines like “Can Darkstar help solve music’s class problem?”.

“It’s not for me to comment on that,” said Young, “we just have to be motivated by the narrative we want to push and not dwell on how others will respond. We felt strongly about presenting Foam Island the way we did and we feel it’s justified given the issues affecting Great Britain today.”

Everything is centred on London ... we wanted to show what other young people get up to in provincial towns and cities

SB: How did you identify people to speak to for Foam Island and how did you decide which voices to use on the album?

JY: It was a long process of literally approaching people on the street then building from there, we were careful of trying to be as broad as possible with the people we chose to speak to and for us to develop a meaningful narrative that served the purpose of the project. We leaned on political issues that were being played out in real time during the process. So it was interesting to see how a younger generation felt about this bigger question happening in the background of the day to day scenarios of their own lives.

SB: Your album “focuses on the people who aren’t involved - the people being ignored”. What’s your opinion on why these people have been ignored?

JY: Many reasons but one we were aware of was, culturally, everything is centred on London. All the cultural publications and websites that dominate what younger people consume are heavily London facing. So from that point of view we wanted to show what other young people get up to in provincial towns and cities.

Another reason was economically how London differs from the smaller towns in cities in the UK. It genuinely is a bubble and a lot of towns and cities outside are in an odd vacuum of trying to keep their head above water; this then creates a tension that is becoming more palpable by the day now, given recent events such as Brexit. The nation is in a fragile state with Foam Island now sounding more poignant than ever, as my record label have just stated on social media.

SB: Were you motivated by wanting to give under-represented people a voice, or was this more of an interesting starting point to make music?

JY: The music didn’t come into it; it was all about giving people a voice that don’t usually have a platform to talk about their concerns. It was interesting to see everyday issues play out in front of us and then being fortunate enough to document that and go away and sequence it together to create a collage of audio that became Foam Island.

SB: How do you settle on the right musical setting for the themes coming out in the lyrics and spoken word sections?

JY: We reacted to them accordingly. If we were talking to Tilly [a teenager whose words “loyalty, kindness and honesty” open the album] about her issues with her job and moving forward in life and her concerns of what she was getting from her position at that moment in time, we knew we’d have to write something sympathetic to that thought process. Something that was neither happy or sad but pensive and starry-eyed, something that resonated with her words and feelings moving forward, something we could listen back to and immediately relate to Tilly talking to us. Once you get used to finding a mood that suits each interview or segment, it gets to be habitual and we no longer were creating for ourselves but for the people we interviewed to try and find the right balance. 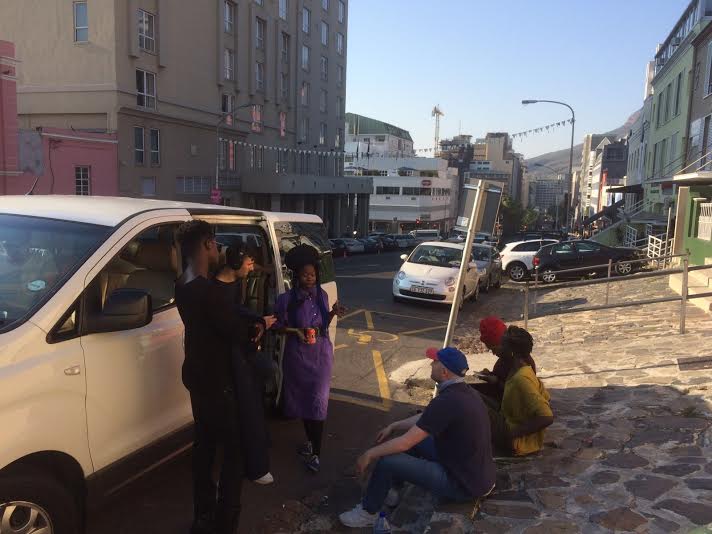 JY: The time frame was so condensed and the social climate is so different [in South Africa]. So from an approach point of view we started with similar questions but what we found was that people were much more willing to get talking about the issues facing the youth of South Africa more quickly. Also race and the effects race has had on South Africa is not an easy subject to navigate if you’ve never had experience of dealing with how tense it still is. So that comes up in almost every instance and rightly so, so from that point onwards the dynamic of the project shifts to it being separate from Foam Island to its own entity given how immersed you have to be in dealing with some of the things people are talking to you about.

SB: What were the highlights and most interesting moments from your time in Africa?

JY: So many … we crammed an awful lot into eight days so every day was a privilege for us. We met a lady called Aunty Ruth who gave us an in depth tour of District Six and its history. To hear how that community was separated and see personal artefacts and possessions that were left behind during the separation was distressing to be honest.

We visited several townships including Elsie’s River, Mitchells Plain and Khayelitsha, and met with some great people who shared their own personal accounts of life in those townships. The people we met were so welcoming and it was fascinating to get an insight into what was going on there. The first thing that struck me was how vibrant and community-led the townships felt. Obviously, we only saw one side and were warned of the problems townships faced daily, like gangs and violence, but we never encountered that thanks to the guides and hosts we had, but it felt like we spent enough time in each one for people to understand the project and open up about their life.

The last highlight I’ll mention was the show in Cape Town on the last night. It was a culmination of what we had been working towards with Cieron who had been filming all week while we recorded audio. We had invited everyone who had taken part in the process to come down and we managed to get three buses full of people from the Khayelitsha township to come and watch us play live along with the visuals Cieron had captured. It was such a positive experience for us to be able to show what we’d been working towards and the reaction was touching. It has to be the best show I’ve played as Darkstar.

Darkstar’s new EP, Made to Measure is out soon on Warp Records featuring collaborations with Gaika and Empress Of.