In April 2016, to celebrate 200 years of friendly knowledge and understanding between Bahrain and the UK, six members of the British Paraorchestra flew to Bahrain with their conductor, Charles Hazlewood, to deliver some special performances.

British Paraorchestra harmonica player, Oliver Cross, was one of the six performers and we spoke to Rehana Mughal, Head of Arts Partnerships in the region, who spent time with Oliver finding out about the particular challenges he’s faced as a disabled musician and harmonica player.

“Anyone that works in music will be familiar with the challenges of touring musicians. It’s not easy flying an orchestra across the world, but what if that orchestra is made up of disabled musicians? What do you do if the only way to get on the plane is to climb a set of stairs? And then when you get on that plane what if the airline attendant has not been briefed about bringing an oxygen tank on board?

“This is why the Paraorchestra builds in a recce visit to assess the entire journey, the concert venue and the hotel - nothing can be left to chance. 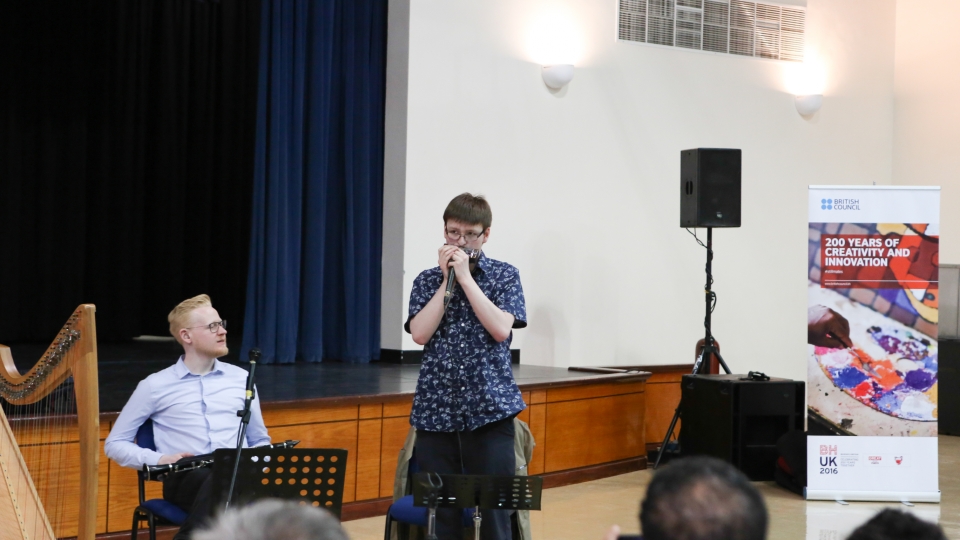 “As a member of the Paraorchestra, Oliver Cross travelled to Bahrain for the first time. He admits he didn’t really know much about the country. Despite all the precautions taken, he fell ill and had to miss the first concert, where the sextet performed at the British Council Country Director’s residence in Adliyah out on the lawn to an audience of over 100 people.

“He bravely managed to muster the energy for the second concert, set in the beautiful surroundings of the Sheikh Ibrahim Centre in old Manama – the capital city.

“Oliver is the second youngest member of the Paraorchestra and an accomplished harmonica player at the age of 19. At the end of the concert each musician played a short solo and Oliver chose to play his own piece, KlezmOligy, a truly powerful and mesmerising piece which managed to captivate the audience despite being played on a simple harmonica with no accompaniment.

“After this, he introduced himself and spoke to the audience about his musical interests, his disability and his passion for harmonicas. He said his harmonica collection has crept up to around 60, as new musical challenges often require new harmonicas!

“He was delighted at the opportunity to have performed in Bahrain. ‘Meeting Bahraini people and talking to them was a real highlight of the visit,’ he said. ‘It was such a friendly place and the people there are so welcoming and very receptive. They have a genuine interest and after the performance I was approached by a group of people wanting to talk to me and ask me about my disability and also about the harmonicas. They wanted to know how I play them and how they work … that was something that you don't often get back in the UK. I'm really not used to groups of people wanting to take selfies with me!’

“Oliver told us that music has always been an important part of his life. At primary school he was the boy that was always in trouble for dancing in the hymns at assembly. Because of his disability he wasn't able to do the things that some of the other young people did like play football, and he hated football with a passion. The problem was that everybody else loved it. 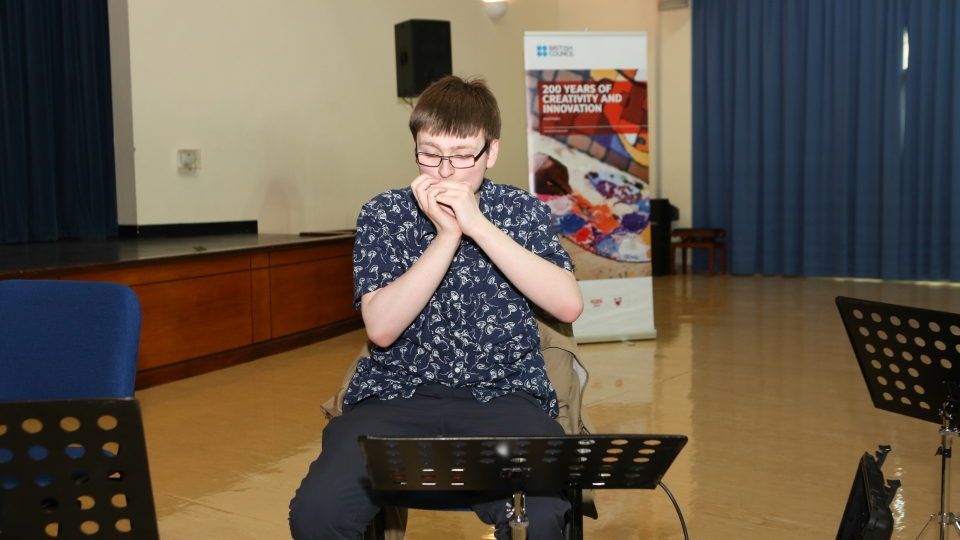 “One day, a workshop with harmonica teacher Steve Lockwood changed everything; something clicked for Oliver and he realised that the harmonica was the perfect instrument for him. About a year and a half later he joined the Paraorchestra at 16 years old.

“Oliver has faced some barriers. He is very much an aural learner which means that he plays best by ear. This is very compatible with jamming in jazz, blues or folk ensembles and Oliver prefers a collaborative musical approach. Although he can play from sheet music, he does find playing in traditional ensembles a little bit more difficult and this requires more preparation and practice.

“Fortunately, the Paraorchestra operates on the basis of musical collaboration; it does not discriminate based on the instrument. Musicians sometimes improvise on musical themes and work together to build something; they rarely work from a set score. This makes things very interesting and beneficial for all involved.

Sometimes I don't know if I'm more disadvantaged by my disability or because I play the harmonica!

“The second barrier Oliver faced was his choice of musical instrument. ‘Sometimes I don't know if I'm more disadvantaged by my disability or because I play the harmonica!’ he said. ‘The harmonica is quite often not accepted in mainstream music or ensembles particularly more traditional musical groups and orchestras. I was told that the harmonica is just a toy and when I was doing my A-level music course I only got the chance to perform once in the seven years that I attended that school.’

“Oliver recalls his audition for the Paraorchestra: 'It was amazing to sit in a room that was ‏full of talented and accomplished musicians and to have even one of them listen to me play the harmonica and not say ‘Are you serious? Is that really your main instrument?’ It is a serious group of professional world-class musicians and they took me seriously and that was fantastic. I learnt more in that one audition than I did in all my study for A-level music, it was then that I knew that this was the thing for me, this is what I wanted to do.'

“The opportunity to travel with the British Paraorchestra to Bahrain has had a lasting and significant impact on Oliver’s life; he is only 19 and has already come such a long way on his musical journey.

“Speaking to Oliver was such an inspiration, he is just one of 28 musicians in the Paraorchestra. There are, I’m sure, 27 other inspiring stories and many more!”