It probably hasn’t escaped your attention that people are saying 2016 is the 40 year anniversary of punk. Even the London Mayor is saying it. So we thought it was a good time to look at punk then and punk now with two members of our Music team here at the British Council, starting with Joel Mills, who saw it, heard it and wore it first time around …

“Oh, how time flies. I can hardly believe it’s been 40 years since the start of punk. I was only 10 years old in 1976 and it wasn’t really until 1977, 78 that I became immersed in the music scene. My oldest brother went to see the Sex Pistols as the SPOTS (Sex Pistols On Tour Secretly) who toured Britain’s smaller towns and seaside places. The Sex Pistols have always dominated the conversations on punk’s origins, but for me, their No Future ethos was much less appealing than other artists. There were some divergent scenes with bands like the Stranglers coming out of the old pub-rock scene and The Clash who were much more political. I was hugely influenced in those years by some of the female artists on the punk scene: Siouxsie and the Banshees, The Slits, X -Ray Spex, Penetration. The women artists were truly ‘out there’ in originality and attitude as well as style. Interestingly, bands like Blondie were considered new wave-lite, despite being involved in the New York punk scene since its early inception. They cleverly bridged new wave with disco and were unafraid of a big pop chorus. Seeing Debbie Harry perform wearing a torn bin bag on Top of the Pops was liberation from the ‘Chelsea Girl’ aspirations of fashion at the time. You can imagine the attire at the next school disco … and its influence in bands of the grunge scene, with Kims Deal and Gordon is apparent right through to current female bands like Skinny Girl Diet and Savages.

Seeing Debbie Harry perform wearing a torn bin bag on Top of the Pops was liberation from the ‘Chelsea Girl’ aspirations of fashion at the time.

“It was actually The Damned who are credited with having the first British punk single – ‘New Rose’ in 1976. They were much more complex and interesting musically and in their make-up. ‘Smash It Up’ was probably one of my favourite punk tunes. It has two parts: the first is a long musical intro. It sounds quite tame now, compared to more edgy sounds around today, but it was surprisingly well-crafted with a pop sensibility in there; at the time there was nothing that sounded like sticking two fingers to the man.

“Then there was Crass, not so much sticking two fingers to the man but more like the whole hand and saying NO! Formed from an anarcho-punk collective in 1977, they raged against the system and were often seen as art-punk for their use for collage, spoken word and music and their political stance too. They used a lot of symbolism but their ethos was about making your own mind up and encouraging dissent. They lived in the communal style Dial House in Essex with Poison Girls and were forerunners to Stop the City politics, an anti-globalisation movement. When I moved to London in the 80s I was part of the squatter scene – living in empty properties and maintaining them – while I studied Cultural Studies in East London. A whole alternative scene emerged around some of these ideals, often falling apart later due to conflicts in ideology.

“Punk inspired and encouraged a brilliantly DIY ethos with artists wanting to break away from mainstream sounds and the assumed aspiration of trying to make it in the pop industry. We can critique punk from our 2016 world on what it did or did not achieve and see contradictions inherent within it, but its influence cannot be underestimated. It opened up a sense of challenging status quo and questioning of values. For me, from my small seaside town world, imagination was expanded and it led to a can-do sense and not just ‘you get what you’re given.’” 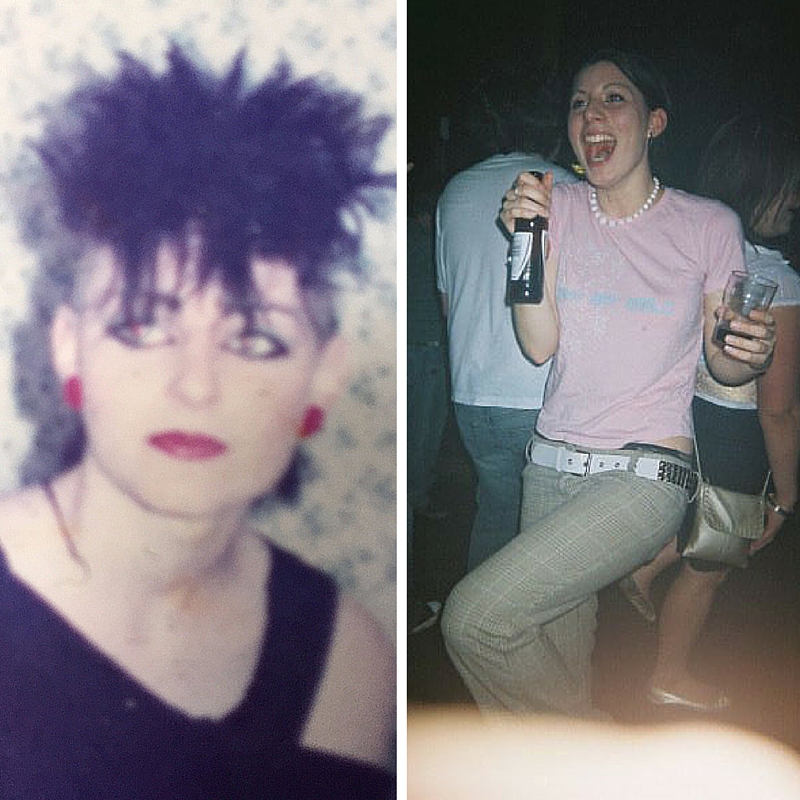 Sophie Mepham takes up the story …

“I was a teenager in the noughties so punk didn’t crash in on my generation with mohawks and bin liner dresses. Instead, I’ve come to know punk through the accrual of subgenres that followed. Some reached dizzying commercial heights, others passed by under the radar, but the fluid movement and exchange of musical styles playing under the punk banner makes for an impressive tribute. So after moshing, skanking and strolling through the tail-end of that 40 year legacy, it’s good to sit back and pay homage to some of punk’s extended family.

“I first tuned in to punk aged 13 via the industrial metal scene, thanks to a Pitchshifter concert that is most memorable to me for the London based support act, Sona Fariq. Their wide-eyed fury blew my young mind, the music a ridiculous menu of riffs, rap and raga mixed in with the band’s Algerian, Pakistani and Bangladeshi heritage. Better still was their approach to … basically everything. When the headlining act said they couldn’t play one night, Sona Fariq called in the support bands and hosted the gig anyway. After being dropped by Warner Brothers – "it felt good to be free again" they said later – SF played the London circuit relentlessly and worked unsigned to record their next album, which they regularly dished out for free with magazines. The music is kind of indefinable but the attitude was surely punk.

“More than musical style, this tradition of self-management, independency from the music industry and a rejection of commercialism is the best part of punk’s legacy. Bands like post-hardcore group Fugazi who formed in the late 80s are still self-managed today, celebrated for having affordable gigs for all ages and releasing records at low cost. More recent bands like Suicide Bid came together playing squat parties in North London. Crucially there were some heroic promoters who held the same DIY ethics as the bands. Household Name records were perhaps the most influential promoters of the UK punk scene in my lifetime. Launched in 1996 by two friends in London, intent on bringing back live music in the midst of samples and rave culture, they began by organising gigs with unknown bands in small venues before establishing a record label to sign them. Slam Dunk records is another independent label founded in Leeds 2006 (where I was a student) that helped swell the ska-core, ska-punk, hardcore scene at that time. Their weekly club night at Leeds Cockpit featured regular gigs and that same year announced the now annual Slam Dunk Festival. In only a few years they had US celebrity ska-punkers Big D and the Kids Table, Reel Big Fish and Less Than Jake playing alongside our local UK bands from the underground punk scene.

“By 2000, ska-punk had gone relatively mainstream with the booming skate-punk culture of the 90s. I was always a fan of the hardcore punk and skate-punk big names like Greenday, NOFX, Rancid, Dead Kennedys, Pennywise … but the DIY mentality of both punk and skate made a happy fusion for young people to make their own scene. Back in my hometown of Preston, my friend Jim built a half-pipe in his Gran’s derelict barn and people formed makeshift cover bands before experimenting with their own tunes. As the internet helped home-grown bands get their music online and form a fan base, I felt more excitement from the grassroots bands like Howards Alias who were my own age and playing in small affordable venues. These bands flourished with a committed fan base spreading to Europe and overseas, supporting established acts like Anti-flag, Capdown and Rx Bandits while embarking on a wholly new progressive strand of punk.

Punk in the 70s and 80s had a slightly mean-spirited competitive edge ... the punk scene I enjoyed was a real collaborative community with women performing on equal terms with men

“It sounds to me that punk in the 70s and 80s had a slightly mean-spirited competitive edge between the bands, particularly when new sounds were developed. In contrast, the punk scene I enjoyed, thanks to promoters like Household Name, Deck Cheese and Slam Dunk, was a real collaborative community with women performing on equal terms with men. Fans and band members mixed as friends both during performances and after gigs. The musicians supported each other’s ventures into a dizzying array of genre fusions by not only touring but swapping line-ups and forging new projects. This nurturing atmosphere and creative freedom made for an eclectic scene that embraced reggae influences (bands like The Skints) rap and ska (The King Blues) and the anarcho-punk tradition of political messaging. Punk purists saying “yeah, but it’s not really punk” were generally met with a collective eye roll. A lot of these groups have split up in the last few years, but others have been reborn with more gusto than ever like my hometown all-time favourites Failsafe who are now The Capital.

“The progress of punk has always depended on the independence of ethical promoters and the creative freedom of bands, so it will be interesting to see how today’s lack of affordable venues and recording time will impact this. Perhaps the commercial sector is meeting DIY culture half way with movements like afro-punk? The proof will be in the pudding.”