Earlier this year, the British Council arranged for British-Bahraini flugelhorn player and composer, Yazz Ahmed, to perform at the annual European Cultural Festival in Algiers as part of our ongoing cultural exchange programme with Algeria. The festival seeks to represent European cultural diversity and promote intercultural dialogue and exchange through art. It features artists from both sides of the Mediterranean with showcases ranging from music to theatre to cinema and there are exhibitions and workshops too. Finding musicians like Yazz and her band – who epitomise an open, collaborative approach to music – was a priority for a festival which prides itself on brokering cultural exchange and collaboration. We were therefore delighted to introduce Yazz to the popular Algerian singer, Amel Zen, and the pair worked on compositions via e-mail in the weeks building up to the event and then performed together at the festival after just a few hours’ run-through before the show. They were joined by Yazz’s longtime band members Martin France (drums), Alcyona Mick (keys) and David Manington (bass).

We spoke to Yazz and Amel after the show, and here’s what they both had to say:

SB: Yazz, we understand getting hold of vibes in Algeria proved difficult …

YA: Yes, finding a vibraphone did prove to be very difficult! We tried the local orchestra in Algiers, schools and individuals, but had no luck. So I decided to ask my pianist and keyboard player, Alcyona Mick, who plays in my larger ensemble, Ahmed Family Hafla. The music I compose and arrange for my quartet is written specifically for the vibraphone. It has such a unique timbre and has a magical quality when the notes blend with the sound of the trumpet and flugelhorn, bass guitar and drums. However, using a keyboard on this occasion worked out beautifully in the end. Alcyona is not only a terrific keyboard and piano player, she also has a great understanding and ear for the particular sounds the instrument can create, so it was a good alternative. 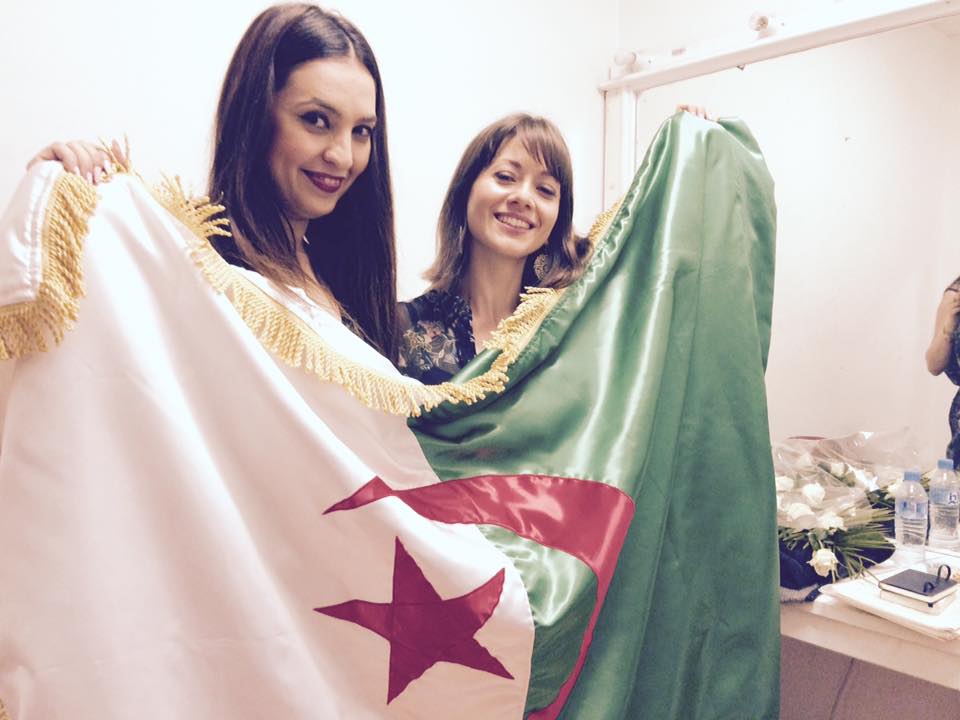 SB: Did you have any other interesting challenges?

YA: It was a challenge only having a few hours to rehearse Amel’s songs with her as well as one of mine I had arranged especially for her. Before leaving the UK, we communicated via email – we would exchange ideas and instructions back and forth before meeting in the flesh! Amel also sent me a little recording of her practicing the song I sent her to learn which was a lovely surprise! I was already really excited about playing with my quartet in Algiers, but after hearing Amel sing my song, I couldn’t wait to start our little collaboration. It can sometimes be difficult working with musicians and singers you have never met before, but from our email conversations, I could tell that she was a serious and hard working artist and I knew that we would get along.

AZ: Working with Yazz was a pleasure thanks to the human and artistic feeling and fusion that happened. The working method was different and interesting. My music is learned by ear, while Yazz writes and reads scores.

SB: What did you find you had in common with each other?

YA: We both have an interest in fusing different styles of music together that are personal to us. We are also two independent female bandleaders and composers who want to promote female independence and power with a desire to inspire all people – male and female, young and old.

AZ: The common point between Yazz and I is first, our love and passion for music and second, our precision in the execution of our work. In addition to this, both of us are contemporary artists, while we find inspiration in our ancient heritage and cultures. Society is my muse and inspires me everyday.

SB: What were the highlights of your time in Algeria?

YA: For me the highlights were not only playing to a welcoming and appreciative audience, but also meeting the people who came to see us play. Everyone was incredibly friendly and inquisitive. One audience member gave us a collection of beautiful shells as a thank you present. I was pleasantly surprised to see such a large crowd and was interested in whether the public would connect with the music. From the very start to the finish I was absolutely delighted to see and hear their reactions – they loved it! We were also looked after very well and enjoyed the time we had to get to know Amel and the British Council team better. It was a wonderful collaboration and project – I hope we get to do it again in the near future.

AZ: I loved being on stage with Yazz and her band, a very beautiful energy on stage. We only did rehearsals for one hour before getting on stage but it was a very pleasant challenge!

SB: What’s next for you this year?

AZ: I’m currently working on my second album. My dream is to collaborate with Sting and Coldplay!

YA: I’m nearing the completion of my second album, which will be released in September. My suite, Alhaan al Siduri, inspired by the work songs of the Bahraini pearl divers and the wedding songs of the women drumming groups, will be performed in Bahrain this October, which I’m over the moon about. It’ll be the first time I have ever played in Bahrain with my band and the first time my father will hear me perform live, so it’s a very special event for me, culturally and personally. My seven-piece band, Ahmed Family Hafla, will also be playing in this year’s Berlin Jazz Festival in November. And, just recently, I have been awarded some funding from PRS Foundation towards recording my suite Polyhymnia, which was premiered at the 2015 Women of the World Festival and played by a thirteen-piece all-female band. The music will be recorded in August 2016 and will be released in the spring next year.