Jamie and Gus met at school in south London before going on to make music together. “We wanted to get away from the clichés of the English language that exists in pop music,” says Gus. They were looking for a bilingual singer, found Sarah online and the rest is history: “She said she was up for it, did an audition, and we gelled straight away.”

Together with the British Council, Kero Kero Bonito will be performing in Indonesia on 18 and 19 November 2016. This begins a season of UK/Indonesia collaboration, building relationships between the countries over three years. The band were spotted at this year’s Great Escape Festival in Brighton when Camelia Harahap and a group of Indonesia industry experts came over to check out some new British music.

Considering its size – over a quarter of a billion people – Indonesia as a country is little known in the UK. In Indonesia, while British music can be heard, it tends to be more from the 20th than 21st century but there is a real love of live music there. We hope this young, tech savvy country is ready for Kero Kero Bonito! Check out some of the band’s videos below. 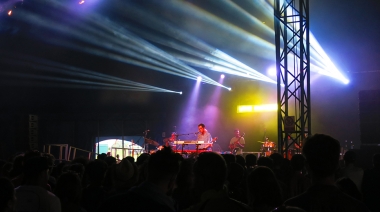 Find out how the British Council's Music team works in partnership with UK festivals and event producers to host international...