The term “British invasion” may be forever consigned to the 60s guitar groups launched from Liverpool and London to colonize the hearts and minds of America’s scream queen teenagers. Yet there have since been several other noteworthy Albion exports, albeit purveyors of an entirely different kind of noise.

In March of this year, the South By Southwest (SXSW) festival in Austin, Texas – an event that is fast becoming a symbol of alternative far from the definition of the current White House incumbent – was the scene of a showcase by a cross-section of stellar British jazz talent: Shabaka Hutchings, Moses Boyd’s Exodus, Go Go Penguin, Sarathy Korwar, Native Dancer.

With ages ranging from mid 20s to mid 30s, these artists are young, certainly in jazz years, but they already have a wealth of stage and studio experience under their belts. Their personalities are strong. Their various recordings are impressive. Yet what is arguably more significant about the list is its regional diversity, with the players hailing from or having lived in Manchester, Birmingham and London. Furthermore, some have roots that flag up Britain as a multi-cultural and post-colonial society. Hutchings was born in Barbados. Korwar was raised in India.

These origins play out in complex ways. Hutchings does not really make calypso-jazz any more than Korwar does indo-jazz, but each artist draws on the rich musical resources of their respective heartlands just as readily as they embrace free improvisation or the possibilities of state of the art technology. Like Britain, the British jazz scene is not homogenous.

Like Britain, the British jazz scene is not homogenous

If the artists in question drew plaudits at SXSW then it is worth bearing in mind that the platform made available for them came through an independent promoter, Jazz Re:Freshed that has provided opportunities for young musicians from its home at Mau Mau, a bustling bar in west London, for over a decade. During that time scores of bands have graced its stage, upholding a booking policy that deliberately embraced players who are wont to engage with branches of pop culture like hip-hop and broken beat as well as the enduring roots of the jazz tradition from swing to avant-garde to Latin. Hence the term “refreshed” in the title is as important as “jazz” because it captures a spirit of newness and adventure that takes precedence over genre per se.

Having said that, notable British jazz musicians past and present have always cast their stylistic net far and wide, as one of the central tenets of the artform is a panoramic, far-sighted outlook in addition to deep individuality. Joe Harriott, Stan Tracey, Mike Westbrook, John Surman, Evan Parker and Steve Williamson, all of whom blazed various trails in British jazz between the 1950s and 80s, are just a few key examples in this respect, as their fertile imaginations absorbed abstract art, left-wing politics, picturesque Cornish coastlines and cutting edge electronics. 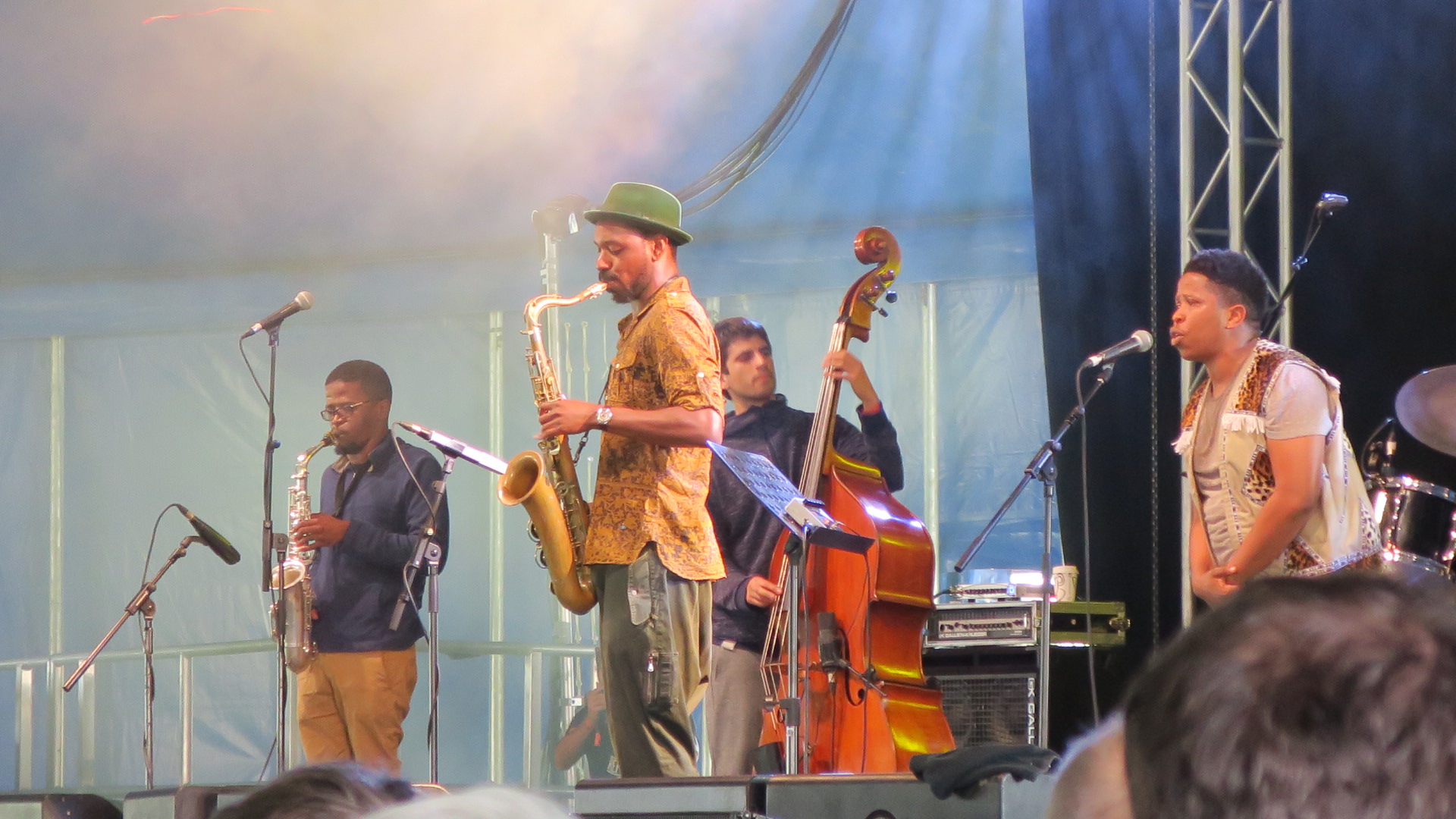 Above: Shabaka & The Ancestors at the Love Supreme jazz festival in 2017. Credit: Stephen Bloomfield

The likes of Hutchings have a comparable curiosity and intellect but perhaps the wave of new energy that has unfurled on the UK jazz scene in the past few years is not just about the pool of talent but also about changes in the world and the mechanics of the music industry, where improvising artists engage as directly with audiences as their pop music counterparts. In terms of drummers alone, Moses Boyd, Femi Koleoso and Eddie Hick are three superlative young sticksmen who can sift through more or less the entire history of jazz by way of the internet or streaming services and draw inspiration from artists new and old in situ at festivals, of which there is a substantial number in the UK and Europe.

It takes confidence, talent and training to pull off a high-risk venture

The other major launch pad, of which they and many others have availed themselves, is the Tomorrow’s Warriors workshop run by veteran double bassist-bandleader Gary Crosby – a man who has selflessly devoted much of his life to sharing his very considerable knowledge with callow youth.

Yet, as much as a player such as Boyd can learn from Crosby, he has brought a character to his work that flows from his specific socio-cultural circumstances. When he and saxophonist Binker Golding, another TW alumnus, released Dem Ones in 2015, the bulk of British critics and listeners were floored by the snapping grooves and freewheeling solos and the audacity of the drums-horn duo, which is by no means an easy format in which to work. The stripped down setting means that any mistakes are conspicuous. It takes confidence, talent and training to pull off what is a relatively high-risk venture.

The clue to understanding why Binker & Moses may have captured the imagination as fully as they did lies in the actual language in which they couched that debut. “Dem ones” is a black British colloquialism that flows from the far-reaching permeation of mainstream English by West Indian speech patterns and lexicon. The point is that “dem” resonates with myriad turns of phrase that have been prevalent in reggae and dub for decades, such as Eek-A-Mouse’s toasters anthem “Wa Do Dem”. Similar tropes feature in hip-hop and grime. Dem Ones reminds us that Binker & Moses are being true to who they are, which is a jazz pre-requisite.

There is an authenticity in their artistic statement and cultural stance that puts them inside rather than outside pop and art and, although their latest release Journey To The Mountain Of Forever is highly experimental – drawing on the input of both Sarathy Korwar and Evan Parker among others – it is entirely possible that elements of grime or a collaboration with its practitioners may be heard in the future.

When one considers that Boyd has already had the opportunity to travel to the Far East with pianist Peter Edwards, on a British Council tour, and that he has co-produced albums such as Arise by Zara McFarlane, it is plain to see that his breadth of experience and output make him a significant new force in British jazz. Then again, the likes of McFarlane and a number of other women, from Faye MacCalman to Shirley Tetteh to Camilla George, active from north to south, also remind us that contemporary British jazz is becoming a little less male dominated, with more females proving adept at what narrow minds might perceive as a “man’s instrument” such as trumpet, saxophone and guitar.

For cynics, diversity and equality may be overused, if not contentious terms in domestic politics, but the appearance of MacCalman at events such as the Gateshead jazz festival and Binker & Moses at SXSW conveys an image of British jazz that is well in step with a pleasingly progressive definition of Britain that transcends race, class and gender.

Lest we forget, jazz is a term that has always been hotly disputed, if not roundly rejected, by many of its iconic exponents who wilfully asserted their strength of character over any label. While clearly indebted to the many traditions in jazz, new faces like Boyd and MacCalman, as well as older players who are also in a rich vein of form, like Denys Baptiste, are providing food for thought on what jazz is and can become.

The essence of the music is a lack of creative limits, and that is best served by an open door to whoever has originality to go, regardless of whether they do or don’t look like what you think a jazz artist looks like.

Fete By The River [Gearbox]

For The People [AHM]

Kevin Le Gendre is a journalist, broadcaster and writer whose work can be found in publications including Jazzwise, MusicWeek, Vibrations and The Independent. He appears as a commentator and critic on radio programmes such as BBC Radio 3's Jazz Line-Up and BBC Radio 4's Front Row.