Blue Monk, Blue Moon, Blue Note, Blue in Green … if the golden age of jazz had a colour, it would probably be a kind of blue. In the UK, there’s a strong argument for saying we are living in another golden age of jazz right now and within it, two friends from North London are establishing themselves as an important fixture. They are Namali Kwaten and David Mrakpor – also known as NK-OK and Mr DM: “I saw this guy [Mr DM] pick up multiple instruments and I knew I had to work with him,” says NK-OK, and they’ve been producing music ever since. Their name? Blue Lab Beats.

In step with so many of their peers on the UK jazz circuit, while the duo might list any number of jazz giants as their heroes, they also find inspiration in beats and techniques from grime and hip-hop, rock and neo-soul. Out of a small blue room in Golders Green, London they’ve developed their own particular blend of soulful, jazz-tinged music that chimes with the times: “We were playing with solos over drum patterns which people were calling too old school, then Kendrick [Lamar] dropped To Pimp a Butterfly and I think that helped reintroduce people to jazz harmony chords.”

From Brighton to Rabat

The duo’s first release, Blue Skies EP, brought them to the attention of audiences and collaborators alike and appearances on BBC Radio 1, BBC 1Xtra, BBC 6 Music, Boiler Room and shows at Ronnie Scott’s and Love Supreme helped to spread the word further. But it was at The Great Escape festival in Brighton that Hind El Ouardi first came across them: “I attended The Great Escape in 2017 as a delegate with the British Council,” Hind explains, “and that is how I discovered Blue Lab Beats. I was impressed by their performance in the marine room at the Harbour Hotel … it was unique and very inspiring.”

Working with the British Council, Hind arranged for Blue Lab Beats to travel to Rabat, Morocco, and collaborate with Cassablancan musician Saad Tiouly for recordings and performances in February 2018.

“Working with Saad was very different,” says NK-OK, “especially how he structures his songs and just the rhythmical feel that he brings to the table … I would put the drum beat down first, then Saad would just jam away for about five minutes then David would join with bass or guitar and yeah, it was pretty much a jam on all of the recordings so it was a lot of fun … I actually have a few recordings [from the Morocco sessions] I just need to finish editing them.”

But what do they feel is important to creating a successful collaboration?

“I think it's really important that you're both in the same mindset of what you want to achieve with whatever song you're making at the time,” thinks NK-OK, “and especially what kind of musical story you want to tell the crowd when you perform that track.” 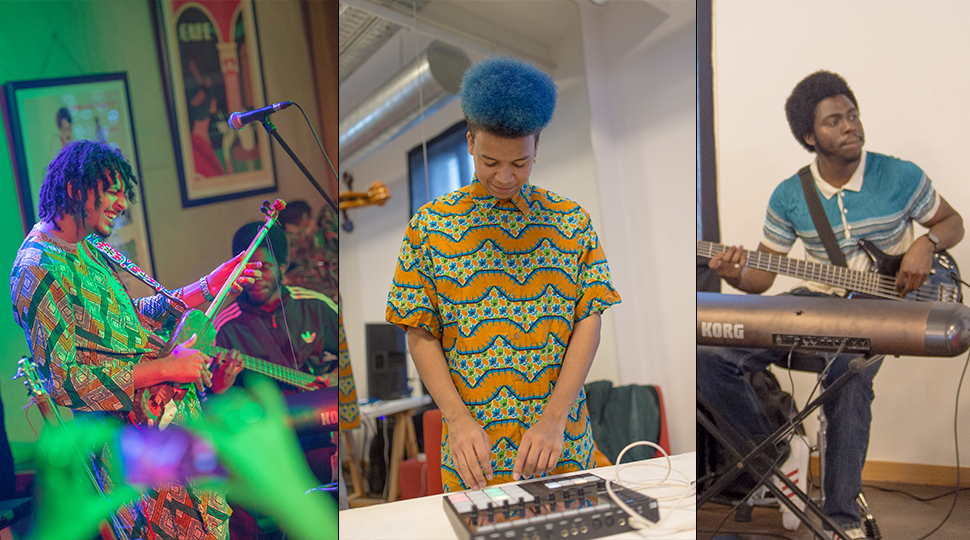 Above from left to right: Saad Tiouly performing with Blue Lab Beats in Rabat; NK-OK rehearsing; Mr DM at the bass and keyboard. Credit: Said Mrigua

After Morocco, the duo flew straight out to North America for SXSW – “great food; good, lovely people, good vibes all around” – and then back to the UK for their new album launch before setting off for gigs in Berlin, Ghent and Lille “and some intimate ones in London,” says NK-OK.

And is there anywhere in the world they would particularly like to go to with their music in the years ahead? “I think the next place I would really like to record in is Ghana. The rhythm section out there is just something else and I would love to capture some of that in our recordings.”

In the meantime, what can we expect from them later this year?

“We play Boomtown this summer and have something special planned in London in the autumn!  But make sure you follow us on Instagram as we put all of our gig dates up on there.”

It certainly looks like, wherever music takes them, blue will be the colour.