Cathy Graham (Director, Music at the British Council) was tonight awarded the prestigious ABO Award for her longstanding contribution to the orchestral life of the UK. The ABO (Association of British Orchestras) is the national body representing the collective interest of professional orchestra, youth ensembles and the wider classical music industry throughout the UK and this annual award is nominated by the ABO’s member orchestras. 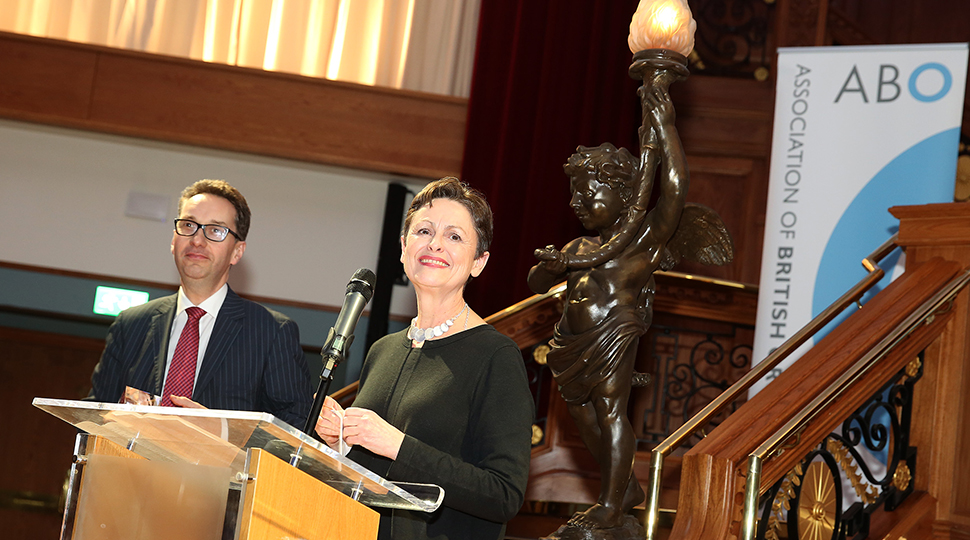 "I will work even harder to make sure the reputation of British orchestras is carried around the world," said Cathy Graham on receiving her ABO Award. Photo credit: Jim Corr / ABO

The ABO Award was presented to Cathy as part of the ABO Conference, this year held in Belfast, with a citation read by Gavin Reid, ABO Chair and Chief Executive of the Scottish Chamber Orchestra:

“Cathy Graham is an enormously well-liked and respected figure in the UK music world and a passionate ambassador for British music across the globe. She has led a life devoted to music. After growing up in Hull, Cathy studied music at Birmingham University and then went on to study piano accompaniment at The Royal Northern College of Music, an institution which, just last month, acknowledged Cathy’s contribution to our musical life with an Honorary RNCM.

“At the start of her career, Cathy spent fourteen years as a professional musician in Stockholm, working as a teacher, vocal coach and repetiteur with opera and theatre companies. Returning to the UK in 1992, Cathy took a change of direction and quickly established herself as an able and talented arts manager. By 1994 she was Executive Director of the Society for the Promotion of New Music, guiding organisational change, and her tenure culminated in SPNM receiving the Prudential Award for the Arts.

“From 1997 to 2006 she was Managing Director of the London Sinfonietta, during which time the ensemble toured extensively, nationally and internationally, and saw its repertoire, profile and audience broaden and increase. Cathy initiated the Sinfonietta’s own record label and spearheaded their move to a new multi-purpose venue at Kings Place. During this period, she also served for six years on the ABO Board, from 1998 to 2006.

“Since November 2006, Cathy has been Director of Music at the British Council in London, working across all genres of music on projects which create trust and understanding between the UK and the rest of the world. She is well known to many ABO members for her constant and active support of our sector, having developed and nurtured a culture at the British Council of pride in and furtherance of UK orchestras.

“This support has varied widely, from giving support that makes the concert happen, to assistance opening doors and navigating different cultures, whether that be for the BBC Scottish Symphony Orchestra in India or the BBC National Orchestra of Wales in Patagonia. Championing UK orchestras' groundbreaking practice has seen inspiring education and outreach work with the LSO and the BBC Symphony Orchestra in Japan alongside the Manchester Camerata's inspirational work with dementia patients. Chinese audiences have experienced the boundary-breaking digital work of the Philharmonia's Re-Rite and Bahrain has seen how music-making at the highest level can be truly inclusive with the Paraorchestra.

“Cathy has been an invaluable partner to the ABO, helping make connections with new markets at ABO conferences, most recently with the Gulf States, and championing the creation of the UK-Brazil Transform Orchestra Leadership Programme from 2014 to 2016 which saw the exchange of emerging orchestral leaders between the two countries.

“The British Council’s current engagement with the sector includes work with the RPO in Kuwait, Welsh National Opera and the BBC Symphony Orchestra in the United Arab Emirates and the realisation of a UK-Russia Year of Music, as well as intensive work behind the scenes to ensure the best possible settlement post-Brexit.

“Cathy has served on many boards and is currently Chair of Streetwise Opera, the award-winning charity that uses music as a means to help homeless people move forward with their lives.

“All of this comes from a deep love of the music. Perhaps most telling of all, Cathy supports music by being there, showing up at so many concerts and performances, making our orchestras, our opera companies and our artists feel the depth and the quality of her support and enthusiasm for the work that we do.”

About the ABO Annual Conference

The ABO Conference is the UK’s leading conference for the classical music industry, with delegates including chief executives, senior management staff and musicians from across the ABO membership, as well as the wider classical music industry including concert halls, festivals, broadcasters, and funding agencies. The 2019 Conference is hosted by the Ulster Orchestra and held in the ICC Belfast, with a concert in the Waterfront Hall.