While we don't know what 29 March will look like politically at the time of writing, as Brexit negotiations continue, we do at least know what it will sound like. Here at the British Council, we're supporting two concerts taking place on 29 March – originally scheduled as “Brexit Day” – to be held on either side of the English Channel, celebrating artistic collaborations between the UK and the rest of Europe. We're delighted to be supporting Aurora Orchestra as they make their debut in Brussels at BOZAR as part of Goodbye, Hello – an evening of music and writers from Britain. At the same time, Matthew Herbert's Brexit Big Band will take to the stage at The Royal Court in London as Herbert launches his new album The State Between Us – the culmination of over a year’s work travelling across the continent, writing and recording with musicians from all over Europe. Both concerts should be so packed with examples of British talent and pan-European co-operation that it will be no surprise if the audience are left wanting more … or at least a short extension …

In Brussels, the closing concert at the Klarafestival will focus on the long history of artistic ties between the UK and the rest of Europe and how artists on both sides of the Channel have always influenced and enriched each others’ work.

Aurora Orchestra and tenor Ian Bostridge, conducted by Nicolas Altstaedt, will perform Les Illuminations, a song cycle by Benjamin Britten based on the text of French poet Arthur Rimbaud. They will also perform Haydn’s Symphony No. 45 in F# minor, perhaps better known as the “Farewell” Symphony, which traditionally concludes with the players leaving the stage one by one, leaving a pair of violins to finish the piece.

“We wholeheartedly embrace the idea of an event which celebrates the ties between the UK and our European neighbours,” says John Harte, Chief Executive of Aurora Orchestra. “As an ensemble whose membership comprises many different nationalities and which tours widely throughout Europe, we are passionately committed to maintaining and strengthening these cultural ties, and look forward to reaffirming them in the company of the BOZAR audience on 29 March”

“We are delighted to be supporting Aurora Orchestra to make their debut in the Klarafestival at BOZAR with this special performance,” says Cathy Graham, Director for Music at the British Council. “It was the Royal Philharmonic Society in London who commissioned Beethoven’s ninth symphony and supported the great composer when both money and good health deserted him, while both Handel and J C Bach (the ‘London Bach’) made the English capital their home for the major part of their careers. The same city inspired some of Haydn’s most celebrated work, and with his ‘Farewell’ symphony we mark the end of one chapter of history between the UK and Europe but also usher in a new era, one which we are determined will be just as fruitful and inspiring for all of our musicians wherever they may live or work across this fabulously creative continent.” 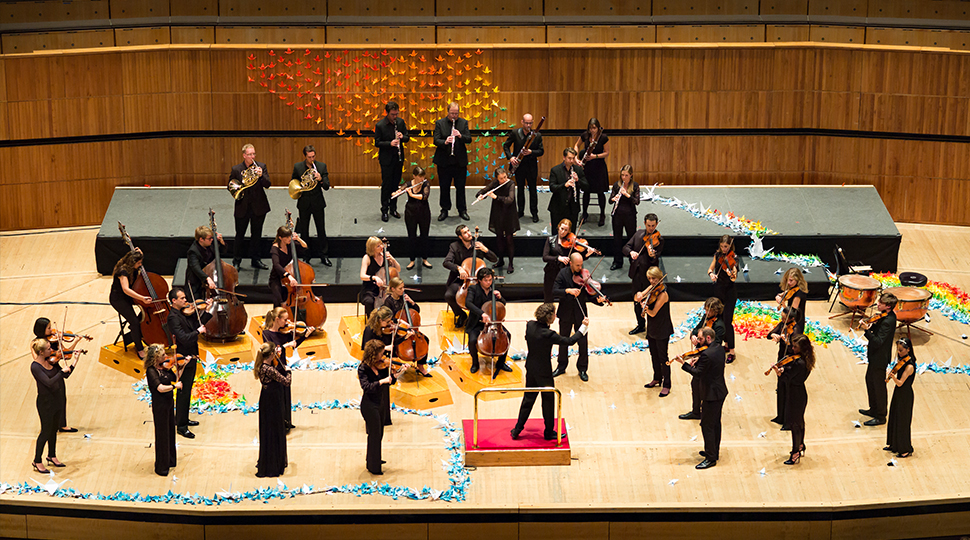 Above: Aurora Orchestra who will be performing on stage at BOZAR, Brussels as part of a special Brexit concert on 29 March 2019. Credit: Nick Rutter.

Matthew Herbert’s Brexit Big Band and The State Between Us

Matthew Herbert’s music has blurred the boundaries between electronic music, dance and – at times – bodily functions. His latest project, variously titled The Brexit Big Band and, latterly, The Matthew Herbert Great Britain And Gibraltar European Union Membership Referendum Big Band, has seen him travel across Europe playing live shows and recording musicians from all over Europe.

The result, a new album called The State Between Us, is due for release on 29 March and on the same night he will play at The Royal Court in London.

Last week, Matthew Herbert released the longest ever single, “A Week in the Life of a Tree” which is the final 166 hours of the life of a 180 year old tree in Hamburg. An extract of this recording is featured on the album together with a vast array of other evocative field recordings: World War II planes in flight, the dismantling of a Ford Fiesta, a cross-Channel swimmer, a cyclist riding around Chequers, Welsh sheep and a trumpet, freshly battered in a fish and chip shop.

The State Between Us Trailer

The State Between Us Album