It’s May and I’m standing alongside colleagues at the Paganini Ballroom in Brighton. We’re some way into BBC Radio 3’s Late Junction night at the Great Escape and Hejira are on stage, led by vocalist Rahel Debebe-Dessalegne, entertaining a rapt audience. “We just went for a curry and it took ages to get it so I just wolfed my curry down, put my face on and here we are,” she explains with a smile. Maybe this is their secret because Hejira give a fantastically assured performance, seemingly unencumbered by curry or anything else for that matter. They give the impression that whatever happened to them on the way to the stage, wherever they might be, they would be able to deliver another spot on set of infectious, soulful, melodic fare. Later that night, the band were on the move again and this time a little further afield. Their first overseas gig was on the horizon: the 18th European Cultural Festival in Algeria and a performance arranged by the British Council.

Last year, we invited Yazz Ahmed to perform at the same festival and teamed her up with Algerian singer, Amel Zen. The festival seeks to represent cultural diversity and promote intercultural dialogue and exchange through art. Formed in London, Hejira are themselves a diverse bunch with Ethiopian, Chilean, German and Hungarian heritage. “We just gravitated towards each other and started making music together,” says Rahel. “This very quickly flourished into a deep and meaningful creative friendship.”

Some bands are made up of individuals, who all grew up in the same town, or even in the same family, so I asked Rahel if Hejira were aware of any aspects of their sound that owe a debt to the music of their various backgrounds?

“Yes absolutely! Although we were all born and brought up in London we have very different cultural backgrounds. This is something that we never really focused on as much until our trip to Ethiopia last year. Going there really inspired us to explore further into my heritage and has greatly influenced our recent EP and upcoming album. We were inspired by the many rhythms and the ancient, tribal and spiritual music of Ethiopia and have an urge to go back for more. I guess what’s incredible is that I've always felt connected to it, with it being familiar but also alien to me. I guess that’s what we are interested in exploring. It’s a really exciting time to be developing a new sound and finding a way to express and embody a part of my culture through our music. We realise that Africa in general is not on the usual gig circuit for a European band but we are really into the idea of changing that, there is so much to give and take from this beautiful continent and we want to engage with that more.” 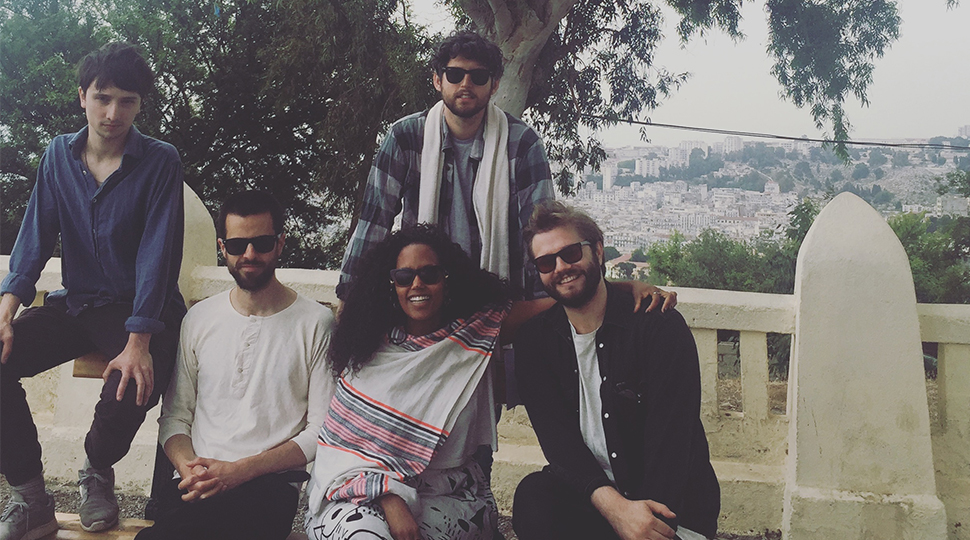 The idea of movement and travel pervades in their band name, an Arabic word meaning “mass migration away from danger to a more secure environment,” according to Hejira’s multi-instrumentalist Sam Beste. He admits the band weren’t fully aware of the various definitions of hejira when they began although they’ve become aware of the numerous interpretations and definitions as they have evolved as a band, and it now seems as apt a name as ever. “It was beautiful to hear how locals [in Algiers] pronounce Hejira,” remembers Rahel, “they really embraced our pronunciation too.”

Joni Mitchell’s 1976 album, made with bass player Jaco Pastorias, shares the same name. Sam explains they were listening to Hejira a lot around the same time they were making their first strides as a band and you can possibly hear shades of this influence on songs like the slowly smouldering “Save It For Another”.

In 2013, The Guardian said the band’s sound was like “Talk Talk jamming with Fairport Convention, overseen by Radiohead”. Does Rahel agree? “I think that was perhaps an accurate comparison for that time and certainly some of those influences still carry on through to this day,” she says. “Our sound is constantly evolving as we continue to experiment and respond to our experiences in a very open minded and honest way. This generally means that we don't sit comfortably in one genre or soundscape.” Their song Pinter certainly has the feel of a latter day Radiohead track but with chord changes somehow more seductive, more like Stevie Wonder’s “I Believe (When I Fall In Love)” than anything from A Moon Shaped Pool. This said, their alternative recording of Pinter takes the song in a new, chilling direction and throws the previous theory out of the window. Safe to say, when you think you’ve decided on the appropriate adjectives to describe them, Hejira have a habit of wrong-footing you.

New bands can sometimes struggle to find the right live setting to show them off, particularly if they are hard to pigeonhole and promoters aren’t sure what sort of bands will provide suitable support. I wondered if this was why Hejira decided to put on their own music night, TRAUM, where they have been able to create a scene of their own and bring likeminded musicians to them?

Rahel explains: “We have always been interested in curating our own live shows. During the writing process for our first album we felt there wasn’t a platform that we could be a part of that could fully represent our world of music so we decided to start our own regular events. Individually we each collaborate with other amazing projects and artists so programming TRAUM was not so hard at first. We are lucky to be surrounded by such an eclectic mix of incredible artists and bands so our events have always been about celebrating our unique community. This has now lead to us establishing our own independent label Lima Limo Records and regular live event Lima Limo Presents.”

And how was the show in Algeria? “Magical,” says Rahel. “We couldn't have asked for a better reception. It all happened so quickly, it still feels quite surreal at the moment. Highlights were spending a brief moment in the beautiful Jardin d’Essais, meeting and jamming with local musicians Chakib Bouzidi and Rafik Ketanni in the stunning courtyard at Villa Abdelatif and hanging out with the wonderful team who were looking after us.

Above: Hejira jamming in Algeria.

“This was our first show outside of the UK so it was a very special and significant step for us … we are still vaguely unknown and mysterious to most, possibly because we spend a lot of energy building our community here in London. However we are striving towards striking a healthy balance with documenting our experiences and process. [Social media has] really helped us to share beyond our usual audience and this is now bringing in exciting opportunities …

“Thank you to everyone at the British Council and to all the wonderful people who came out to see us in Algeria –your support and love is very much appreciated. We will never forget this experience and we hope to bring the music back to you soon.”

I wondered if there were any bands or musicians around at the moment that Hejira were particularly enjoying or taking inspiration from? “Yes many!” says Rahel. “Tawiah is an amazing artist and is about to release her new EP Recreate on Lima Limo Records. We can’t wait for the world to hear it. Layendekker are a new band out of south London that our current band members Calum and Jonny are part of. We really love their new single “Thankless” and recently had first dibs on viewing their soon to be released video which we think is pretty special. I’m also really into Mikael Seifu, a modern electronic producer from Addis Ababa. There are many other established artists that we love and draw inspiration from also: Bjork, Prince, Bowie, Nina Simone, JDilla, Grizzly Bear, The Invisible, Matthew Herbert [producer of Hejira’s first album], Micachu, Sigur Rós, PJ Harvey, Eska … the list goes on and on.”

It seems fitting Rahel should come up with such a long and eclectic list of influences. For Hejira – in name, sound and ethos – seem to be constantly looking around, soaking up ideas and moving at speed into an exciting future, occasionally wolfing down curry en route.

Hejira’s new EP The Lima Limo Ceremony is out now and available on Limited Edition 7" vinyl and digitally on iTunes, Spotify and Bandcamp.

Hejira’s next album is due for release in early 2018 with plans afoot for some very special live shows.