DJ and broadcaster Emily Dust brings us the story from Zambia and Zimbabwe where, with our support, she's been working with an all-female group of emerging DJs as part of our Rackless Kazi project. While the DJs learnt a lot from her, the experience also made Emily reflect on the various paradoxes of being a DJ in any part of the world – an often solitary vocation and yet one that brings huge numbers of people together onto the dancefloor.

Above: Emily Dust in conversation with Selector Radio's Jamz Supernova – herself a former Rackless Kazi mentor – about Zambia, Zimbabwe and DJing in general

I wake up to a message in the group chat (is it even a trip if you haven’t got a group chat?): ‘I don’t know where I am or what year it is’.

It’s Sunday in Harare, Zimbabwe. The sender is one of five mentors, including me, who have been leading the Rackless Kazi workshops in Lusaka, Zambia, teaching women the fundamentals of DJing. After a week of teaching and two club nights in a row in two different countries, broken up by a hideously early flight, it’s fair to say we’re a bit tired. Knackered, in fact. But what a week it’s been.

Rackless Kazi is a programme organised by Modzi Arts, a brilliant organisation run by Julia Kaseka and her team. Kazi is slang for ‘women’ in the chi chewa and nyanja languages, so Rackless Kazi means ‘wild women’ – a serious statement of intent in an area of the world where the idea of women going out to the clubs to play music is still misunderstood by many. As soon as you step through the gates at the Modzi Arts Centre, it feels like an artistic, creative space, with murals covering the walls and inspirational quotes painted on the ceiling by the young people this building is built for.

DJing is about skill and passion, not about gender

Each day consisted of masterclasses for the 10 participants, followed by technical training. The mentees spanned a huge range of abilities, from those who’d been playing for years to those who had never touched a deck before. They’d travelled from Namibia, Mozambique, South Africa, Botswana, Malawi, Mauritius, Zambia and Zimbabwe and were united by a passion for music and wanting to hone their craft. Oh, and their gender.

Personally, I hate the term ‘female DJ’. To me, and all of the women I know, DJing is about skill and passion, not about gender. We have bass DJs, hip hop DJs, gqom DJs, afrohouse DJs … ‘female DJ’ is not a genre. Listening to the many issues that participants and the mentors still face was a reminder that, although we face different challenges, the UK definitely hasn’t reached equality either. Until that happens, it is vital that women have spaces where they can come together to learn technical skills, experiment with their sound, ask questions, gain confidence and share experiences. It’s also vital that women see other women perform, watch them own the spotlight and be rightly and publicly rewarded for their work, whether that’s fair pay or headline slots. There is immense power in this; the UK has some amazing collectives of women and our music scene is all the richer for it. Global interest in African electronic music is booming, so it was exciting to be part of building a collective on the continent that centres on women. 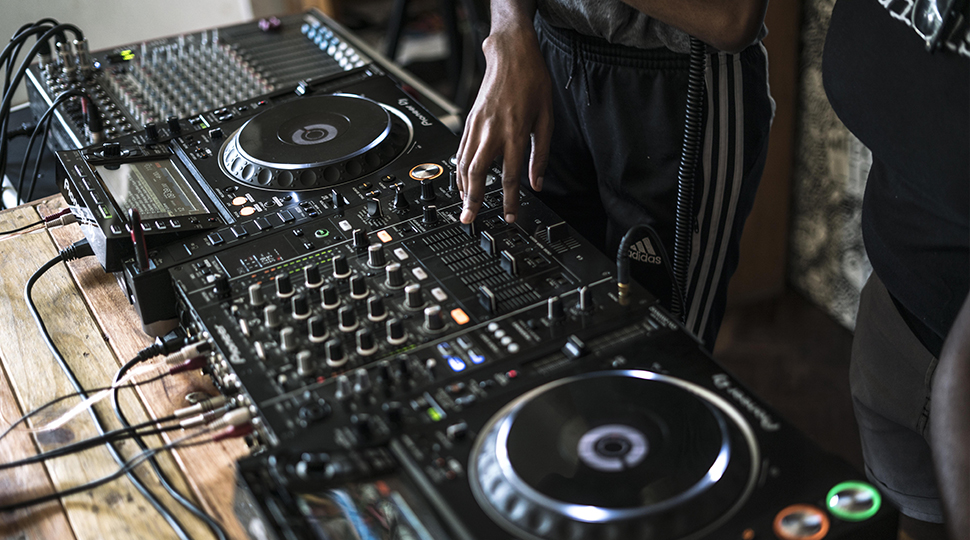 Above: working the decks during the Zambia workshops for Rackless Kazi. Credit: Ludovico Serra

I had serious imposter syndrome when I met my fellow DJ mentors. There was my roomie, King Her, who’s killing it on the Harare scene in Zimbabwe with four residencies every weekend. Her onstage rapport with the crowd is utterly infectious – watching them sing along to every word of her set at a packed Evitro on Saturday night was spine-tingling. Then there was Catu Diosis, also a producer and part of Uganda’s infamous, wonderful Nyege Nyege crew. Taking in samples of boda motorbike taxis and spoken word, her sound is boldly experimental. She also jumped on the mic during her set, adding layers of reverb to her vocals on the spot. There was Ms Selfie, a participant on last year’s Rackless Kazi who’s now established herself as one of Zambia’s leading DJs. She is a great advocate for women and a formidable presence on the scene, confidently asking for whatever she needs and not putting up with any nonsense. And there’s badass Namibian producer Gina Jeanz, who has built an incredible career for herself entirely on her own terms. Her effortless sets are infused with warmth and skill; she’s just played this year’s Afropunk. (I fangirled at her about Namibia, because that’s where I first discovered African electronic music. Without that formative trip I probably wouldn’t be doing what I do now). From the first evening, we bonded immediately and were quickly sharing stories of our careers and geeking out about music.

All our energies were focused on getting the participants ready for Friday night at Fox & Hound, Lusaka, where all of us were due to play. The classes really came to life when the participants started practicing on the decks – from afrohouse to gqom, local dancehall to baile funk, I didn’t hear one dud tune the whole week. As we got closer to the gig, people zoned in on technical details – how do you transition more smoothly between tempos? How do you keep the energy up but play all the tunes you want to get in? How do you know what the crowd wants next? Practice sessions went on later and later each night, with participants taking turns on the decks until well past 1am the night before the show.

We also covered some of the business skills in the masterclasses like how to represent yourself as an artist on social media, getting gigs, invoicing, DJ etiquette for yourself and other people and building a community. My masterclass was on taking creative risks.

There’s a paradox in DJing – on the one hand, you’re connected to an entire room full of people all at the same time, channeling their energy through music. It’s like group telepathy. Being able to guess what a group of people you’ve never met (whose mother tongue you don’t speak and whose hometown is halfway across the world from yours) will want to dance to is a dark art. We live for the moments when we get that right. On the other, you are usually onstage alone and travel alone, meaning you don’t always have someone to share the experiences with, or to encourage you to push the boundaries. Being prepared to take a risk and knowing how to follow up with the next tune comes with experience and confidence. Being supported as you grow – that is vital.

I felt the pressure to impress them; I knew they’d be listening closely

When Friday came, the energy was palpable. I was once told that nervousness is just excitement upside down and as soon as the first DJ pressed play you could see one melt into the other. Assured and confident in her selections, she had the rest of us cheering her on from the dancefloor. The club filled up throughout the night and soon it was time for us mentors to play as well. I have to say I felt the pressure to impress them; I knew they’d be listening closely. My sets range through experimental and percussive sounds and I knew a lot of the tunes I usually play would be unknown to the crowd here. But it was important to me to represent my sound authentically and, having talked about it all week, take the creative risks I usually would – otherwise what kind of mentor would I be? As I mixed in a loop and proceeded to radically alter the tempo from 130 to 150bpm, I looked up. They were still with me, and the change in speed had taken the energy up on the dancefloor exactly as I’d hoped. Seeing my Rackless Kazi crew in the crowd going crazy was a massive boost – I wish they could be at all my sets!

The mood at the end of the night was euphoric and we said our goodbyes on the bus home. The next morning after very little sleep, the mentors and I flew to Zimbabwe to meet some of the key players there, visiting a radio station, the amazing Moto Republik and, of course, the local clubs. As much as we were able to teach the participants, it was equally great to learn from each other and grow our own networks too.

It’s rare when I travel (whether that’s general travel or for music) to meet that many women. The opportunity to meet so many women who share my musical obsessions was amazing. The mentors and I celebrated our last night together in typical DJ fashion: sitting in the reading room of our hotel with our laptops out, playing tunes and swapping USBs packed with secret weapons. At one point a man opened the door, popped his head round and quickly closed it again. The message was clear – this is your space; I’ll let you get on with it. Everything was as it should be.