Writer and broadcaster Matthew Sweet gives us his thoughts on film's unique position as a gateway into a world of incredible, and sometimes challenging, contemporary music.

Our culture is in the grip of a secret musical passion. Secret even to itself. Each week, millions of ordinary Britons go to a dark place, sometimes on the edge of town, sometimes in the middle of the city, and surrender to pleasures they might find hard to name. Avant-garde electronica. Seat-vibrating minimalist drones. Huge, grand orchestral melodies that prove the nineteenth-century romantic tradition is thriving in the twenty-first. And sometimes they do this while watching Scarlett Johansson eviscerate unsuspecting Scotsmen, or Tom Cruise crash a helicopter into a Kashmiri mountain. Whether we acknowledge it or not, the movies make contemporary music lovers of us all.

Only the most austere realist filmmakers dispense with a composer: most are grateful for the opportunity to enhance their stories with an element that can move beyond the reach of language or image. Imagine, for instance, the Psycho shower scene without Bernard Herrmann’s slashing modernist strings. (Hitchcock could: he had to be persuaded to let Hermann loose on it, and history is grateful that he listened to his composer.) Imagine watching The Cabinet of Dr Caligari without musicians to help you navigate its German Expressionist nightmare. (A masterpiece, but how naked it seemed at the screening I attended where the pianist was a no-show.)

Above: Mica Levi's striking score is an integral part of Under The Skin (2014)

Cinema began as a vagabond art form. It travelled from place to place, popping up in tents, church halls, empty shops – which means that its early associations with music are hard to track. It’s often asserted, for instance, that a French film of 1908, The Assassination of the Duc de Guise, is the first movie with an original score. But its prominence on the record is better explained by the fame of its composer, Camille Saint-Saens. His less-celebrated contemporary, Herman Fink, was praised for the “beautiful and very original” music he wrote for a 1904 biopic of Marie Antoinette.

To reduce a massive and under-researched history to a paragraph, however, we can say that silent film often relied on repurposed material from the classical repertoire; that Hollywood’s golden age of orchestral screen music began with the talkies, and an influx of talent moving west to escape Hitler; that the decline of the studio system in the 60s brought stronger emphasis on pop, jazz and electronic music; that the success of John Williams’s Star Wars score in 1977 instituted a vigorous and as-yet-unexhausted revival of the full orchestral score; and that today’s film music ecology is a rich one which supports sounds as diverse as Hans Zimmer’s percussive thunder, Carter Burwell’s melodic minimalism, and the Wagnerian feast served up by Michael Giacchino.

Most films may be made with a mass audience in mind, but the medium has a long-standing sympathy for the musical avant-garde

Those are Hollywood examples. But even if we limit the survey to British composers, there are plenty of big beasts to encounter. The Surrey-born recording artist Mica Levi has created a new and agonised form of chamber music for the screen – the rattling horrors that accompanied Scarlett Johansson’s alien murder spree in Under the Skin; the searingly loud and low cello tones that conveyed a First Lady’s grief in Pablo Larraín’s Jackie. In the last few years, Steven Price has emerged as a fine architect of post-modern musique concrète – for the Brad Pitt war drama Fury he built and melody and rhythm with sounds harvested from the belly of a Sherman tank; his Oscar-winning score for Gravity conjured a meteorite storm from the sampled and manipulated violins of Eleanor Rigby. (The BBC Radiophonic Workshop would approve.) Anne Dudley, who began her musical career in the 80s Dadaist pop outfit Art of Noise, recently wrote a thrillingly discomfiting score for Paul Verhoeven’s psychodrama Elle. Her music provided the audience with a means to read Isabelle Huppert’s amoral heroine: in one memorable scene, she spies on her neighbour and masturbates – and without Dudley’s busy violin line, the moment would lose much of its transgressive impact.

And if all that sounds rather out-there - well, it is. Most films may be made with a mass audience in mind, but the medium has a long-standing sympathy for the musical avant-garde. Partly because, as a dramatic art, it always has a use for the discordant; partly because producers love a bargain, and something strange by a six-piece string band or some eccentric with a wobbulator is always going to be cheaper than hiring a 64-piece orchestra.

Whole schools of musical radicalism have enjoyed cinema’s patronage. The serialists – followers of the twelve-tone system of composition devised in the 1920s by Arnold Schoenberg – are a striking example. In 1944, the composer Scott Bradley adopted the twelve-tone method for a Tom and Jerry cartoon, where it accompanied a scene of surreal violence in a dog pound. “I hope Dr. Schoenberg will forgive me for using his system to produce funny music,” said Bradley, “but even the boys in the orchestra laughed when we were recording it.” David Shire used the same system to produce the thrilling serialist funk that forms his score for The Taking of Pelham 1-2-3 (1974), as did Jerry Goldsmith when he devised the bizarre sound-world of Planet of the Apes – helped by the early Echoplex sound sampler, a set of stainless steel mixing bowls, horns stripped of their mouthpieces, and woodwind players willing to finger their keys without blowing into their instruments. 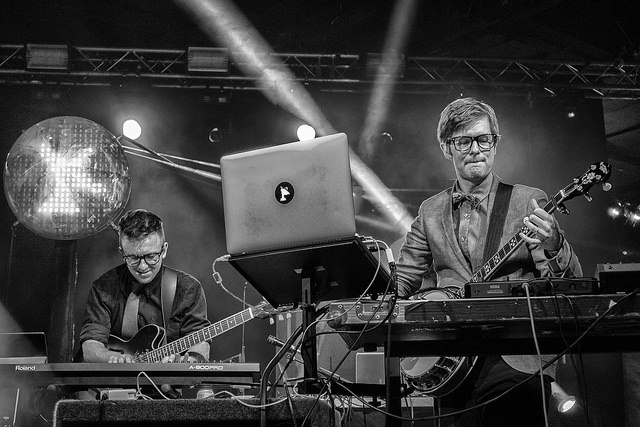 Above: Public Service Broadcasting are among a cadre of bands and artists moving between rock gigs and screen scores. Image credit: Paul Hudson (CC BY 2.0)

Elizabeth Luytens, the first British composer to master Schoenberg’s system, built a career in film music precisely because she found concert hall compositions so difficult to secure. Lutyens, a glorious eccentric who wore green nail varnish and boozed with Dylan Thomas and Francis Bacon, wrote a series of arrestingly odd scores for British films of the 1960s. These were not arthouse projects, but bracingly cheap horror and science fiction pictures, some aimed at the Hammer horror fans, some aimed at kids: the high avant-garde, shrieking and booming from films such as The Earth Dies Screaming (in which two alien cyborgs lay siege to a home counties pub), The Skull (in which the bones of the Marquis de Sade possess Christopher Lee) and The Terrornauts (in which some British scientists and their tea lady are blasted across the galaxy on an asteroid). Evidence, perhaps, that cinema audiences often have less conservative tastes that those in the concert hall.

In 1946, Igor Stravinsky asserted that “film music is significant in many ways, of course, but not as music.” Few commentators would now dare to dismiss it so completely. The BBC programmed a Prom in John Williams’s honour; Hans Zimmer and Ennio Morricone can fill stadiums; audiences flock to see Jaws and North by Northwest with the score played live; talents such as Johnny Greenwood and British Sea Power move effortlessly from rock gig to screen score.

But a subtle cordon sanitaire remains in force between music composed for the movies, and music composed for the platform. Here’s one reason to erase that line. In the concert world, dead composers dominate. Recent statistics suggest that in the UK, performances of contemporary classical music – works by living composers - shift 50,000 tickets a year. Not bad, but not much compared to the 170 million cinema visits made in the same period. It’s time, perhaps, to fold those figures together. Just because we’re looking at the Millennium Falcon screeching through the asteroid belt, or Jackie Kennedy grieving in the Oval Office, it doesn’t change the nature of the deal. We’re part of an audience listening to the work of some of the world’s most daring and accomplished living composers; part of a public for whom new music is not a rarefied experience, but part of the fabric of an ordinary night out.

Matthew Sweet was commissioned to write this piece as part of the British Council's second Film, Music and Archive Lab Week.

Matthew Sweet presents Night Waves and Freethinking on BBC Radio 3, and is the summer presenter of The Film Programme on Radio Four. He is the author of Inventing theVictorians and Shepperton Babylon, which he adapted as a film for BBC Four. His TV programmes include Silent Britain, A Brief History of Fun, The Age of Excess, Truly, Madly, Cheaply and The Rules of Film Noir.